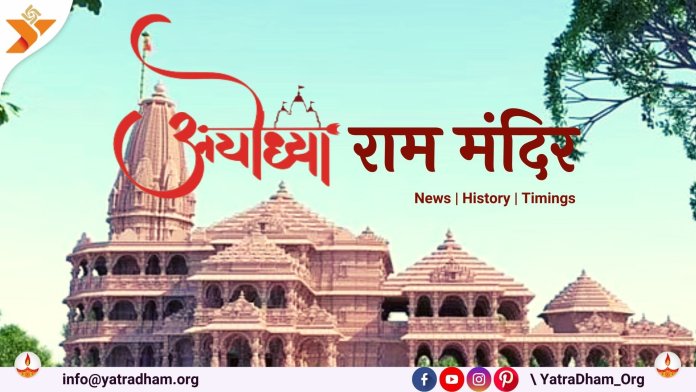 Some milestones were also crossed.  Especially on the day of 9 November 2019 when the Constitutional Bench of 5 judges delivered the historic verdict.

The Ayodhya land dispute case was one of the longest-running cases in the country.

Let me tell you when the foundation of this dispute was laid and important milestones of history till now.

According to the Hindu side, under the main dome was the birthplace of Lord Rama.

The Babri Masjid had three domes.

The government got it locked as a disputed structure.

Grand Ram Navami will be celebrated in the makeshift Ram temple. Only 50 devotees will be allowed to attend the special puja and other ceremonies on Ram Navami. A large number of devotees are expected to visit the Ram Janmabhoomi on Ram Navami. Thus it will not be possible to allow entry to all of them. Hence trust has decided to show the ceremony live on LED screens at select locations across Ayodhya.

Trust’s trustee Shri Vishwaprasanna Tirtha Maharaj informed that about one thousand crore rupees have been collected from the country.  He is the abbot of Peja in Udupi, Karnataka.

In the first shift, Ram Lalla’s darshan Ayodhya Ram Mandir Darshan can be done from 7:00 AM to 12:00 noon.

The influx of devotees has also increased during the construction of the Ram Mandir, due to which the devotees are seeing a crowd in the New Ayodhya Ram Mandir.

The sanctum sanctorum of the grand Ram temple in Ayodhya will be opened for ‘Darshan’ for devotees in December 2023.

A total of 200 guests including sages and saints will participate in the program Bhoomi Pujan of Ayodhya Ram Mandir.

However, the foundation stone of the Ram temple was laid in Ayodhya thirty years ago with the permission of the Rajiv Gandhi government on 9 November 1989.

The first brick in the foundation stone was laid by Kameshwar Chaupal, who comes from the Dalit community.

The donation campaign has started for the Ram temple to be built at Ram Janmabhoomi in Ayodhya.

How to Donate to Ayodhya Ram Mandir

A trust has been formed for the construction of Ayodhya Ram Mandir, named “Shri Ram Janmabhoomi Teerth Kshetra“.  Everyone is giving their donation to this trust and it is also exempted from income tax.

If we talk about the methods of donation, the donation can be done by giving cash directly, by sending it to the account of the trustor through an online medium.

The direct cash deposit will give you a receipt at the same time, whereas on an online payment you will get a direct mail generated receipt and the bank account transferee can generate the receipt from the official website.

On the official website of “Shri Ram Janmabhoomi Teerth Kshetra”, the option has been given for the people transferring from the bank account.

Three bank account details have been given by the trust, which includes the names of State Bank of India, Punjab National Bank, and Bank of Baroda.

You can send money to any of the three banks.

50% of the donation made to “Shri Ram Janmabhoomi Teerth Kshetra” for the temple is exempted from tax under Section 80G(2)(b) of Income Tax Act, 1961.

That is, income tax exemption will be available in the donation given for the construction of the temple.

The central government has considered the Shri Ram Janmabhoomi pilgrimage area as a historical place of worship.

You can donate to the construction of the temple in three ways. The special thing is that if you want to give more than 20 thousand rupees as a donation, then you have to give through an online medium or check-DD.  Donors can pay up to Rs 20,000 in cash.

Coupons are being printed Donate to Ayodhya Ram Mandir

According to reports, a campaign has been launched to donate to the construction of Ram Mandir, for which coupons have been printed.  In this, there will be a receipt ranging from Rs 10 to Rs 1000.  In this, you can give money as per your wish.

Dharamshalas in Ayodhya near Ram Mandir

If you are planning to go to Ayodhya then you can book your hotel, ashram, or dharmshala. with us.

For more details visit us at our site YatraDham.Org

How to Reach Ayodhya Ram Mandir?

If you want to come to Ayodhya, then it would be better for you to land at Varanasi or Lucknow airport.  For Varanasi, Lal Bahadur Shastri International Airport or Chaudhary Charan Singh Airport in Lucknow will have to be selected.

After coming from here, you can reach Ayodhya by taxi, bus or rail.

You can easily come to Ayodhya from Faizabad railway station. Ayodhya is only 7 kilometers away from here.

Apart from this, some trains also come to Ayodhya on the Lucknow-Gorakhpur route, even having Mankapur railway station. The distance from Ayodhya to Mankapur is 38 km.

You can easily reach Ayodhya by bus from any corner of Uttar Pradesh. You can get a bus to Ayodhya from anywhere in Uttar Pradesh.

For more details visit us at YatraDham.Org

Ram temple, Ayodhya - Uttar-Pradesh will be opened by December 2023