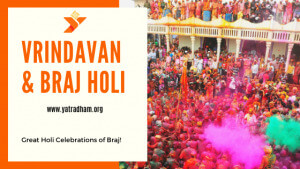 Braj, also known as Brijbhoomi is the land of Radha and Krishna…. of the Gopis…. of Yashoda Maiya… of the Yamuna…. of milk and butter…  Indelibly ingrained in the Indian ethos.
Mathura, Vrindavan, Barsana, Govardhan, Nandgaon and Gokul along with the meandering Yamuna are where everything revolves around in  Brijbhoomi.
The festival of colours and the advent of spring. Holi is India’s most boisterous festival, celebrated with great importance. But the celebrations in Brijbhoomi are in a class of their own.
Holi in Braj is not like the Holi as we know it – played with colours only.
Holi in Braj played not only with colours but also with laddoos, sticks (lathis) & flowers. All accompanied by a heady ‘Thandai’, a drink made with milk and herbs.
The celebration here is not limited to one day, but goes on for 40 days!
Book a Stay at Vrindavan/Mathura.

Some of the prominent days and events of this celebration are:

The celebrations pick up the tempo with the Barsana Phool Maar and Laddu Holi at the Sriji Temple. This is a temple on Bhanugarh peak in Barsana and dedicated to Radharani.
Devotees gather in the temple. They shower flowers on the idols of Krishna and Radha. They throw laddoos at them amidst the song, dance and flying colours. These laddoos are gratefully accepted as ‘Prasad’. The colours used here, are made from flowers only.

Celebrations shift into high gear on day 2 with Barsana Lathmar Holi.
Legend has it that Krishna, with his friends, used to come to Barsana to play Holi with Radha and other Gopis. The elder women, not liking it, chased them away with Lathis. Recreating the past, men from Nandgaon (Krishna’s village) come here to play Holi. And the women chase them away with lathis!
All this is done in a light spirit, with the exchange of colours and banter between the men and women. Much to the enjoyment of all.

In a reversal of sorts, Nandgaon Lathmar Holi was enacted in Nand Bhawan. Now it is the turn of the Barsana men to come to Nandgaon to play Holi and colour the Nandgaon women. They are duly chased away by the Nandgaon women with a rain of lathis! All this amidst flying colours, flowers and mischievous banter in a joyful spirit.

Vrindavan – Banke Bihari Temple Holi. This day also being Rangbharni Ekadashi. Holi is celebrated with great fervour at this ancient Banke Bihari Temple in Vrindavan. Thousands gather here on the day of Holi. And the scenes of the splashing of colours, unhindered joy and gay abandon are a sight to behold. The priests of the temple also join in the celebrations.
A celebration on a grand scale,Krishna Janmabhoomi Mathura Holi is an event to witness. The Krishna Janmasthan Mandir is the place where Shri Krishna was born in a small cell. Devotees from all over the world gather here. The atmosphere here is that of joy and bonhomie. Colours fly so thick and fast that it is difficult to see beyond a few feet! Lathmar Holi is also played here in a light hearted and friendly way.

Gokul is the place where Sri Krishna was brought up in secret by Nand Baba and Yashoda Maa. This is where Krishna used to steal butter, tease gopis and get punished by Yashoda Maa! On this day Gokul Holi is celebrated here in the traditional way.

Holika Dahan on the eve of Holi, a huge fire is lit for the burning of demoness Holika. This symbolizes the victory of good over evil. This is a time for family reunions, festivity and joy.

Dhulandi  The big day! The whole Brijbhoomi erupts in a carnival of colours – dry and wet. Clouds of every imaginable colour are seen floating everywhere. Loud music and Holi songs are heard all around. Groups of people roam about all over. Drenching anyone and everyone they come across with coloured water! Joy, abandon and brotherhood permeate the atmosphere.
For Holi enthusiasts, participating in an extended Braj Holi is what dreams are made of! The uniqueness of celebration in different ways will make it an unforgettable experience.
Share
Facebook
WhatsApp
Previous articleTejas Express Train Between Ahmedabad to Mumbai
Next articleSrisailam Temple timings – Mallikarjuna Dharshanam, Dress Code