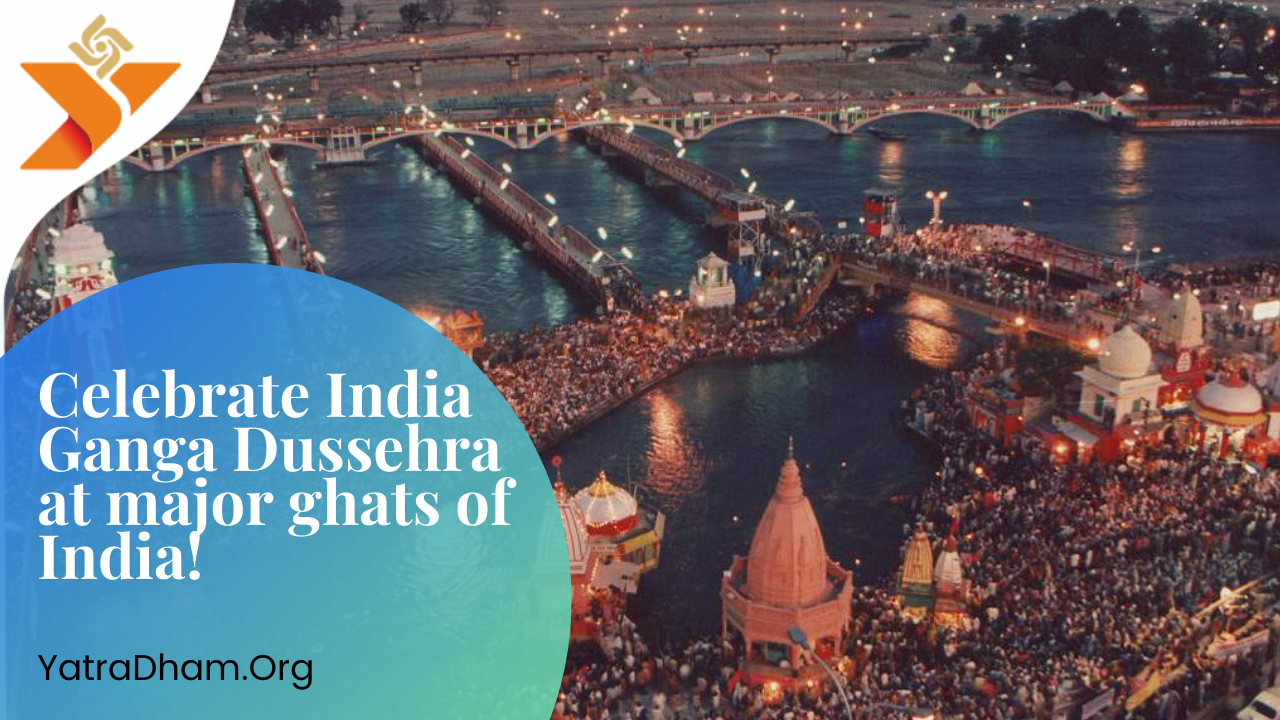 Holy river Ganga came down to Earth from the heavens on this day, or so is the belief. Taking a dip in the Ganges today is believed to cure people of their illnesses

Ganga Dussehra, also known as Gangavataran, is a Hindu festival celebrating the avatarana (descent) of the Ganges. It is believed by Hindus that the holy river Ganges descended from heaven to earth on this day. Ganga Dussehra takes place on Dashami (10th day) of the waxing moon (Shukla Paksha) of the Hindu calendar month Jyeshtha. The festival celebration lasts ten days, including the nine days preceding this holy day.

Ganga Dussehra is observed by Hindus mainly in the states of Uttar Pradesh, Uttarakhand, Bihar, and West Bengal, where the river flows. Haridwar, Varanasi, Garhmukteshwar, Rishikesh, Prayagraj, and Patna are the main locations of the celebrations, where devotees gather at the banks of the Ganges and perform aartis (a religious ritual in which a light lamp is moved clockwise circularly in front of a deity as a part of prayer) to the river. Taking a dip in the river on this day is believed to bring the devotee to a state of purification and also heal any physical ailments he may have. In Sanskrit, Dasha means ten and Hara means destroy; thus bathing in the river during these ten days is believed to rid the person of ten sins or, alternatively, ten lifetimes of sins

Lakhs of pilgrims took a holy dip at Har Ki Pauri, with Ganga Dussehra being observed on Sunday with great religious fervor. With two back-to-back ‘sense of Ganga Dussehra and Nirjala Ekadashi, and the festival falling on a Sunday, pilgrims from different states of the country thronged the holy city.

Security was upped by the district administration in Haridwar. The main bathing ghat Har Ki Pauri and other bathing ghats along the stretch of Ganga were dotted with pilgrims throughout the day. Monday will again see an important bathing date of Nirjala Ekadashi, the 11th day of the lunar month

The river Ganga has a great religious, historical and mythological significance for Indians, especially Hindus. It rises at Gangotri, high in the snow-clad Himalayas and cascades down mighty boulders, flowing into the hot plains of Uttar Pradesh, Bihar, and finally meets the waters of the sea in the Bay of Bengal. The Ganga is revered all over India, even in places far from its course, and water from the Ganga is considered to be very sacred and is an important inclusion for all Hindu rituals.

Ganga Dussehra is a holy festival that is dedicated to the worship of the river Ganga and is celebrated for ten days, beginning on the Amavasya (dark moon night) and ends on the Shukla Dashami (tenth phase of the moon). It is celebrated on the 10th day of the month of Jyeshta as per the Hindu calendar. This period corresponds to the month of May or June according to the Gregorian calendar. This festival is celebrated with great fervor in the states of Bihar, Uttar Pradesh, and West Bengal

Mythology states that this is the day on which the sacred river Ganga descended on earth from heaven. So this festival is also known as ‘Gangavataran’ which means the descent of the Ganga. Regarded as a celestial river descending from heaven, Ganga is the most sacred river in India and is worshipped with a belief that Goddess Ganga can wash away all sins of mankind. The name Dussehra comes from ‘Dus’, which means ten and ‘Hara’ which is tantamount to defeat. Thus, it is believed that praying on this day can help you attain salvation from 10 sins and cure your physical ills. Ganga Dussehra is celebrated at major ghats of India such as Varanasi, Allahabad, Garh-Mukteshwar, Prayag, Haridwar and Rishikesh.

The spirit of celebration

While the priests and others performing ‘puja’ of the Yamuna by applying Chandan (sandal) and showering rose petals, kite-flying is an important an event. The largest crowds assemble at Haridwar, Mukteshwar and Varanasi of Uttar Pradesh.

Why is it important for devotees?

When the river came down to Earth, it brought along 10 rare Vedic astrology calculations namely- Jyeshtha month, Shukla Paksha (bright half), Tenth date, Wednesday, Hasta Nakshatra, Vyatipata yoga, Gar Anand Yog, Moon in Virgo, and Sun in Tauras. Now it is said that these ten Yogas absorb all the sins when a devotee takes bath in the holy river on Ganga Dussehra.

So it is believed that Hindus who take a dip in the river this day will be able to purify themselves and remedy their physical ills.

Where is Ganga Dussehra celebrated?

Ganga Dussehra celebration is mainly observed in the states of Uttar Pradesh, Uttarakhand, Bihar, and West Bengal, where the river flows

Why is Ganga Dussehra celebrated?

Ganga Dussehra is observed by Hindus mainly in the states of Uttar Pradesh, Uttarakhand, Bihar, and West Bengal, where the river flows. ... Taking a dip in the river on this day is believed to bring the devotee to a state of purification and also heal any physical ailments he may have.

How is Dussehra celebrated in UP?

There are many places in Uttar Pradesh state of India where Dussehra is celebrated by setting statue of Ravana on fire by Lord Rama. It depicts the victory of good over evil. At cities like Varanasi, Lucknow and Kanpur, Ram Leela is performed on grand level at prime locations of the city

The auspicious occasion of Ganga Dussehra is being celebrated on June 1, Monday this year. The day is celebrated to mark the Gangavataran or 'the descent of the Ganga' on earth. According to the Hindu calendar, the festival is celebrated on the 10th day or Dashami of the waxing moon in the month of Jyeshtha.

Which city in India is famous for Dussehra festival?

Kolkata is considered to be the Dussehra capital of India. The 'City of Joy' certainly does justice to its name once the celebrations start and the ambience is filled with the vigour of the festivities.

Which state is famous for Dasara?

Mysore: Dasara Given the stature of a state festival, Dasara, as it is known in Karnataka, is a tradition that goes back more than four hundred years

In which state Dussehra is celebrated for 75 days?

Chhattisgarh RAIPUR: Famous Bastar Dussehra, a 75-day unique festival, now being held in tribal heartland of Chhattisgarh, has nothing to do with Lord Rama's triumphant return to Ayodhya after decimating Ravana, but it's all about nature and Devi Ma Danteshwari, the presiding deity of Bastar

Why do we celebrate Dussehra in India?

Dussehra celebrates the Hindu god Rama's victory over the demon king Ravana and the triumph of good over evil. The epic Ramayana tells the story of the Lord Rama who wins the lovely Sita for his wife, only to have her carried off by Ravana, the demon king of Lanka. Ravana plays an important role in the Ramayana

Which God is Worshipped on Dussehra?

According to Ramayana, Ravana was the son-in-law of Mandasur as it was his wife Mandodri's paternal home. That's is why people in Mandasur worship Ravana for his knowledge and devotion to Lord Shiva. The place has a 35-foot tall statue of Ravana and the people of Mandasur hold prayers to mourns his death on Dussehra

YatraDham.Org is the only portal where you find the best accommodation options that go well with your trip objectives. From Katra to Kanyakumari and Dwarka to Jagannath Puri Our objective is to provide a single platform for all your destination needs, whether it is Char Dham or Dwadash Jyotirlingas, or other religious destinations

Haridwar City Details | Things To Do in Haridwar

Vaishno Devi Yatra - The Trek from Banganga to Bhavan