Temple is located in Dakshineswar, Kolkata the eastern bank of the Hooghly river. The deity of Bhavatarini resides here which is the form of Kali. Bhavatarini is the one who liberates her devotees from the ocean of existence.

The temple was built by Rani Rashmoni in the mid-19th century. Kali Temple is the nine-spired main temple. There’s a large courtyard that contains twelve Shiva temples. Kali Temple and the RadhaKrishna Temple are the most important among them. 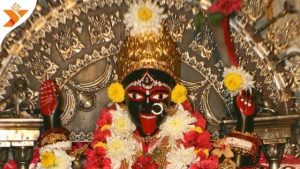 Rani Rashmoni, Mahishya by caste decided to go to Kashi for pilgrimage. 24 boats for relatives, servants, and luggage were arranged to reach Kashi. Just before the night of departure, she saw Divine Mother in the form of Maa Kali in her dream. Kali Maa told her there was no need to go to Banaras to express her devotion. She can install her idol near the banks of Ganga and worship her here. Maa Kali told Rani Rashmoni that she would manifest and bless people here.

Rani Rashmoni then took the work of building the Kali Temple at Dakshineswar in 1847. The construction was completed in 1855 at the cost of nine hundred thousand rupees. Rani Rashmoni died just five years and nine months after the construction. When Rani knew she would die, she had already handed over her properties to Dinajpur (Bangladesh), as a legacy to maintain the temple.

The temple is very important in the context that the existing deity of Bhavatrani is considered as
‘Samsara – One who liberates people from the ocean of existence.’

Snana Yatra – Snan Yatra is an important festival for the devotees of Jagannath. It is celebrated on the Purnima day of the Hindu month of Jyeshtha. This is the birthday of Lord Jagannath.

This day, Temple was established on 31 May 1855. So, this is a very important festival for  Temple.

Kali Puja – Kali Pooja falls on the new moon day of Kartik month. This coincides with the Lakshmi Pooja of Diwali. The northeastern states of India including West Bengal, Tripura, Assam, Bihar, and Odisha also present-day Bangladesh praise Kali Mata while the rest of the country worships Goddess Lakshmi. Kali Pooja is celebrated with great hustle and bustle in the Temple.

How to reach the Dakshineswar Kali Temple?

Cycle, Rickshaws, and Auto Rickshaws are available as local transport. Hiring a taxi or driving your vehicle will also be convenient. You also look for local buses to reach the Dakshineshwar Kali Temple.

Where to stay near Temple?

Click on the name of Accommodation for online booking in advance.

Places to visit near Temple.

May this information will be useful for you. For such information visit our latest blogs on other tourist places and temples in India visit the link given below.

Swamiji,
We are two senior citizens is like to get bhog coupon tomorrow for afternoon,what is to do for getting the coupon
please write for confirmation in email.