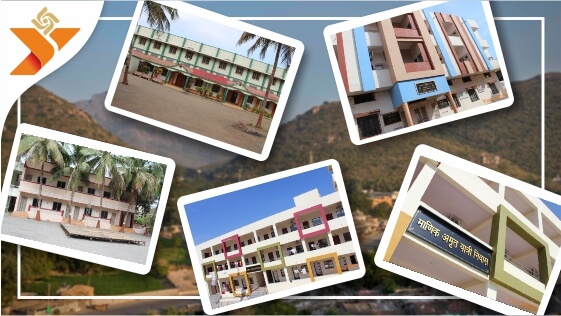 Want Affordable Dharamshala Accommodation in Junagadh? Then you’re in the right place.

Junagadh Railway Station is just 6 Km from the Dharamshala. Bus Station is 7 km away. Prernadham Lal Gebi Ashram is 43.5 Km from Keshod Airport.

Junagadh Railway Station is 5.2 Km away. Dharamshala is at a distance of 5.2 Km from the bus stand. Keshod Airport is 42 Km from the Samast Prajapati Ekta Bhavan.

Dharamshala is near the Junagadh Railway Station. The bus depot is 7.3 Km away. The airport at Keshod is 43.7 Km from Dharamshala.

Distance from arrival point
Hari Ashram is 2.5 Km from the Junagadh railway station. Dharamshala is 1.5 Km from the bus stand. The airport near Junagadh is at Keshod at a distance of 42.7 Km.

Distance from arrival point
Jungadh Railway Station is 6.5 Km from the Dharamshala. It is located 7.4 Km from the bus stand. Keshod Airport is 44.0 Km

How to travel to Junagadh ?

By Road
Junagadh is connected well by road to major places of Gujarat like Ahmedabad, Bhuj, Bhavanagar, Dwarka, Somnath and Rajkot.
Regular buses service is easily available.
Both private and state-owned buses can be availed to travel to Junagadh from these cities.

Places to visit near Junagadh.

1. Girnar
The Girnar mountain ranges are an important pilgrimage and tourist site.
Jains and Hindus gather here during the Girnar Parikrama festival.
Girnar is one of the five major ‘tirthas’ attributed to the ‘panchkalyanakas’ of various ‘Jain Tirthankaras.’
It hosts a number of temples and some historical spots across its range.
The mountain Girnar is older than the Himalayas.
It is the Nirvana bhumi of the 22nd Tirthankara Neminath.

2. Gir National Park & Wildlife Sanctuary
Gir Forest National Park was established to protect Asiatic lions, along with leopards and antelopes.
Gir Jungle Trail is home to wildlife including vultures and pythons.
The Kamleshwar Dam has marsh crocodiles and birds, such as Indian skimmers and pelicans.

4. Tulsishayam
Tulsishyam is located in Gir Somnath district.
There is an ancient temple of Lord Vishnu-Lord Shyam.
Legend says that Lord Krishna eliminated the demon called Tul.
The place is associated with Krishna as Shyam and is thus called Tulsishyam.
The idol of Lord Tulsishyam is said to be 3000 years old. It is made up of black stone.

5. Uparkot Fort
Uparkot is a fort and town established at the foothills of Girnar hill.
It is built during the reign of the Maurya Empire and continued to be used during the Gupta period.
The fort lost its importance when the capital of the Saurashtra region was moved from Junagadh.

6. Madhavpur beach
A scenic town, Madhavpur is situated on a sandy coastal line.
The beach is endowed with coconut trees and fertile agricultural land.
It hosts the beautiful Madhavraiji Haveli Temple in addition to the Rukmini no choro.
This is the place that celebrates an annual fair held by the Mer community.
The beach is not safe for swimming but perfect for taking in the sea breeze.

8. Darbar Hall Museum
It is built in a beautiful old palace of Junagadh.
The Darbar Hall Museum is amongst the finest museums in Gujarat.
It preserves the treasures of the Junagadh rulers.
Darbar Hall was the court for the erstwhile Nawabs of Junagadh.
Then it was converted into a museum to preserve the possessions of Junagadh Maharajas.
Darbar Hall Museum houses different galleries exhibiting around 2900 artefacts- picture gallery, palanquin room,
textile and costumes gallery, weapons gallery, etc.
The artefacts that depict the lifestyles of the Nawabs are the major highlights of the museum.
Owing to its exquisite collection of artefacts, the museum is visited by people in huge numbers.

9. Ashok Shilalekh
Ashok Shilalekh in Junagadh is one particular rock edict of Ashoka.
Ashok Shilalekh is found in an area between Junagadh and Girnar Hill.
It is located 3 km from Girnar Hill and 2 km eastward from Junagadh.
This rock with inscriptions dates back to 250 BC.
The instructions penned on this rock are related to dharma, peace, morality, harmony and tolerance.
On the rock, the 14 inscriptions of Emperor Ashoka are written with an iron pen, in the Brahmi script of the Pali language.
There are also some inscriptions carved in Sanskrit.
This is really nice place to spend holidays and vacations with your relatives and friends.

10. Somnath
If you have enough time, you can also enroute Somnath.
Somnath Temple is believed to be the first jyotirlinga shrine of Shiva.
It is an important pilgrimage and tourist spot of Gujarat.
Somnath Temple is invaded many times by Muslims and Portuguese invaders.
The present temple was reconstructed in the Chaulukya style of architecture by Sardar Vallabhbhai Patel.