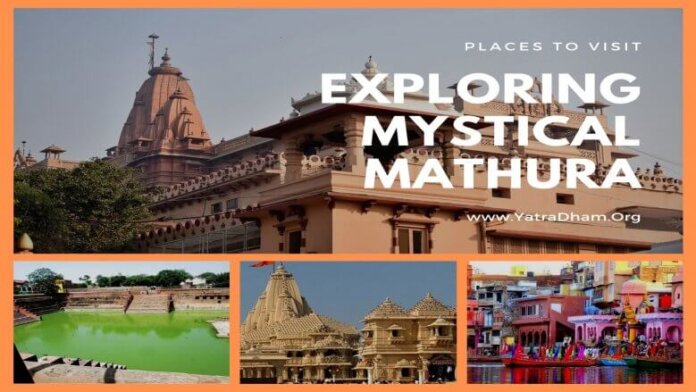 Mathura is a pilgrimage as old as time itself. Mathura, Vrindavan, and the surrounding areas are known as Brij Bhoomi. This is where Shri Krishna was born and lived in the earlier part of His life. Here everything centers round Shri Krishna.

Mathura is one of the Saptapuris (Seven Holy cities of India) and a highly revered religious destination. This is the land of Shri Krishna, of Radha Rani and the Gopis, of the Yadavas and their beloved cows. This is the land of Yashoda Maiyya, of Nand Baba, Vasudeva and Devki Mata. The heart and soul of Brij Bhoomi – the sacred Yamuna River meander through Brij Bhoomi.

Shri Krishna is the Eighth Avatar of Bhagwan Vishnu and the Master of all Mysticism. He appears on earth to protect the righteous when the world is overshadowed by evil.  Not very far from Mathura, Shri Krishna preached the Bhagavad Gita to His disciple Arjuna in the midst of a battle. The Bhagavad Gita is the essence of all that is needed to achieve the highest position and unite with God.

Mathura is where Shri Krishna was born to Vasudev and Devki Mata in a tiny prison cell. He was then whisked across the Yamuna to be brought up by Nand Baba and Yashoda Maiyya. Mathura is the place where He chose to be born. The significance of Mathura has endured through the centuries and is home to several ancient temples and places connected with Shri Krishna. Let us look at some of them –

The Shri Krishna Janmasthan consists of a group of temples built on the spot where Shri Krishna was born. The original temple was in existence since time immemorial. It has been looted and destroyed multiple times by invaders in the last 1000 years. The complex has three main shrines and a sacred Kund besides a library, Ayurveda Bhavan, guest house, an open arena and shops.

Keshavadev Temple – This temple was built by Ramakrishna Dalmia in 1958 and inaugurated by Hanuman Prasad Poddar, one of the founders of Gita Press in Gorakhpur.

Garbha Griha Temple –  This temple has been built nearest to the spot where Shri Krishna is believed to have been born. It has an underground cell and a marble pavilion. Adjacent to the temple is a shrine dedicated to Yogmaya Devi.

Bhagavata Bhavan – This temple dedicated to Srimad Bhagavad Gita was completed in 1982. The entire Gita is engraved on copper plates on the walls of the temple. Enshrined in the sanctum are Murtis of  Radha-Krishna, Balaram, Subhadra, Shri Jagannath, Shri Rama-Sita – Lakshman, Durga Mata, Hanumanji and Chaitanya Mahaprabhu. Scenes from Shri Krishna’s life are depicted on pillars, the ceiling and walls.

Potra Kund – This is a sacred stepped Kund also known as Pavitra Kund. It is believed Shri Krishna was given His first bath here. The steps were built by Mahadji Scindia in 1782 and later renovated by his descendants in 1850.

This is one of the oldest temples in Mathura. It is also one of the largest temples located in spacious premises. Dedicated to Dwarkadhish – as Shri Krishna was known after He established a new kingdom in Dwarka, the temple was built by the Scindias of Gwalior in 1814. A black stone Murti of Shri Krishna and a white marble Murti of Radha Rani are enshrined here. The temple is an architectural splendor with a richly carved Rajasthani-style entrance and intricately carved pillars that support the ceiling. Another temple dedicated to Shri Vishnu with a Shalgram Murti has also been built within the premises.

This temple is dedicated to Mata Yamuna and Her brother Yama – also known as Dharmaraj. Mata Yamuna and Yama are the daughter and son of Surya dev, the Sun God. Located near Vishram Ghat, this is among the oldest temples in Mathura. The festival of Bhai Dooj is celebrated here with great fanfare and zeal.

This is considered the oldest temple in Mathura. It is dedicated to the primeval form of Vishnu Bhagwan’s Varaha Avatar. It is believed the image of Varaha Avatar was created by Rishi Kapila in Sat Yuga. The Murti enshrined here is made of black stone.

Bhuteshwar Mahadev Temple in Mathura is yet another ancient temple. This is one of the few temples not dedicated to Shri Krishna in Mathura. Also a part of this temple is the Patal Devi Temple. It is believed that Mathura was established after the killing of demon Madhu by Mahadev. The Shivling was also enshrined at that time. Mahadev is also known as the ‘Kshetrapal of Mathura’.

Chamunda Devi Temple is a Shaktipeeth temple. It is believed a strand of Mata Parvati’s hair fell at this spot. The unique feature of this temple is that there is no Murti here. Rishi Shandilya and Guru Gorakhnath have meditated at this place and are said to have achieved enlightenment here. This is an ancient temple that finds mention in the Bhagavata Purana.

Vishram Ghat and other Ghats of Mathura

There are 25 Ghats on the banks of the Yamuna River in Mathura. Vishram Ghat is the most important ghat in Mathura. It is believed that Shri Krishna rested here after the killing of Kansha. Vishram Ghat is almost exactly in the center with 12 ghats on one side and 12 on the other. In each of the ghats you will find some ritual being performed, sadhus bathing and people paying respects to their ancestors. Besides Vishram Ghat some of the other important ghats are – Akrura, Chakratirth, Ganesh, Yamuna, Kankhal, Prayag, Krishnaganga and Saraswati Sangam ghats. Some of the ghats are elaborately built with pillared porches. Boat rides are available for those so inclined. The ghats transform into magical sights with the arrival of the evening. Aartis and pujas are done at each ghat amid the ringing of bells, chanting of Mantras, and blowing of conch shells. Hundreds of lit lamps can be seen floating down the river, creating a mesmerizing effect.

Besides the temples mentioned above, there are many more to explore in Mathura. A few days in Mathura, Vrindavan and other places in Brij Bhoomi can be an extremely rewarding experience. This is where Shri Krishna Himself lived. What better place can there be to enrich yourself spiritually and recharge with Divine Energy?

Buddha Purnima - All you need to know