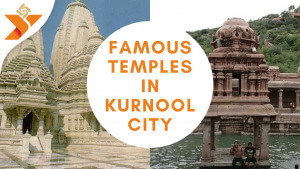 Kurnool in Andhra Pradesh has a number of feathers in its cap. It is the fifth-largest city in Andhra Pradesh. Situated on the banks of the Tungabhadra River, Kurnool is known as the Judicial Capital of Andhra. It is also referred to as The Gateway to Rayalaseema. Finally, it can be called a Temple Town because of the countless temples located within the city Explore Famous Temples in Kurnool City.

Though Kurnool is an ancient city, the earliest recorded history is known dates back to the 11th century CE when it was a trading hub transit point. Later in the 12th century, CE Kurnool came under the rule of the Chola Kings, followed by the Kakatiyas and finally the Vijayanagara Dynasty. In later years Kurnool came under Mughal rule followed by the British. A notable feature of Kurnool besides the temples is the Kondareddy Fort, which was constructed in the 16th century CE.

Numerous temples were constructed over the centuries by various rulers, giving them a distinctly religious character.  Some of the more prominent temples in Kurnool are –

How to reach Kurnool

Kurnool has its own railway station which is well connected to other cities in India.

Hyderabad airport is the nearest airport, about 200 km from Kurnool.

For More details about Famous Temples In Kurnool

Are you planning to visit Haridwar and looking for options to Stay with Family? Then don’t wait! Choose from our selected Dharamshala in Kurnool City and book your vacation with YatraDham.Org