Hemkund Sahib is situated 6 km from Gangharia. Shri Hemkund Sahib is a pilgrimage destination for Hindus and Sikh in Chamoli district, Uttarakhand. This temple is built on river hemkund.  It is believed that Lord Lakshamana Regained his health by meditating on the bank of Hemkund. The Lakshmana temple is built at the place where Lakshmana meditated to regain the health and it is the attraction for Hindu pilgrimage.

Hemkund is a Sanskrit name means, Snow(Hem) Bowl (Kund). The Dasam Granth says god ordered  Shri Guru Gobind Singh to take bath while he was in deep meditation at the mount of hemkund. Hemkund Sahib Yatra is done only in the summer, between the first week of June and first week of October. From October it is inaccessible till April because of snow. Sikh pilgrims arrive in May to work to repair the damage of the path, which is known as Kar Seva. Hemkund Sahib is the highest temple in India and Highest Gurudwara in the world.

Contents show
Hemkund Sahib Yatra Opening Dates
Hemkund Sahib Helicopter Service
Things to carry while traveling to Hemkund due to its cold weather and climatic changes.
Warm clothes like sweater or jackets Torch, First aid kit Raincoat for everyone.
Fact
Where to stay?

The Kapat of Hemkund was about to open on 25th May 2020. But It is not opened yet due to heavy snowfall. Official opening date is not declared yet. We will update the blog as soon as we get any information. 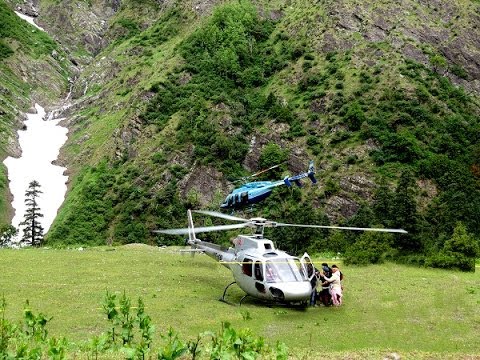 Things to carry while traveling to Hemkund due to its cold weather and climatic changes.

Warm clothes like sweater or jackets
Torch, First aid kit
Raincoat for everyone.

This is the only Gurdwara in the world to be constructed at an altitude of 15,210 feet.

It’s the only Gurdwara in the world to have a pentagonal structure in its design. A very distinct feature considering the prominence of domes in all the Gurdwaras.

Which is very near to Hemkund Sahib Temple. You can easily book this Dharamshala from yatradham.org.

I want to go there on motorcycle for prayer