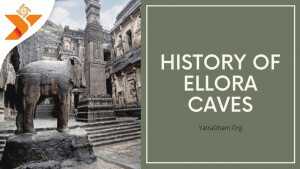 Ellora Caves near Aurangabad in Maharashtra is one of the largest cave temples and Monasteries complex in the world. They are broadly divided into three groups – Hindu, Jain, and Buddhist monuments. The Buddhist caves comprise monasteries, Viharas, living quarters and prayer halls. Notable among them is the Vishwakarma Cave. At one end of the complex are five Jain caves. The Hindu caves were excavated mainly during the Kalachuri period from the 6th century CE to the 8th century CE.

One of the most notable examples of these rock-cut temples is the Kailash Temple. This huge temple consisting of a gateway, assembly hall, main multi-storied temple and other smaller shrines, has been carved out from a single rock. It was made to resemble Mount Kailash.

How to reach Ellora Caves

For more information about the History of Ellora Caves, Aurangabad

Are you planning to visit Haridwar and looking for options to Stay with Family? Then don’t wait! Choose from our selected Dharamshala in Aurangabad and book your vacation with YatraDham.Org