Lepakshi is a place that can be described as one of the most visitable destinations in India. Lepakshi, for some reason, has not been on any major tourist circuit and has remained relatively unknown. That has now changed. More and more people are getting to know of this gem tucked away in the Anantapur district of Andhra Pradesh. Lepakshi is on the border of Andhra Pradesh and Karnataka, just 120 km from Bangalore.

Jatayu from the Ramayana fell at this spot while trying to save Sita Maa from Ravana.  He flew up in the sky as Ravana was fleeing in a chariot with Sita Mata. Jatayu fought valiantly but was no match for Ravana, who cut off his wings. Sadly, Jatayu fell to the ground, grievously injured. Sri Ram, in pursuit of Ravana, found Jatayu lying on the ground, wounded and drawing on his last breaths.

Sri Ram said to Jatayu “Le Pakshi”, which in Telugu means “Rise O Bird”. Jatayu rose for one final time and died in Sri Rama’s arms. Hence came the name – Lepakshi. Faithful  Jatayu died after which Sri Ram Himself performed the last rites, as he would have for a brother.

The Veerabhadra Temple here is an ancient architectural and engineering marvel. A courtyard lined with magnificent corridors with carved pillars leads to the main temple. The walls and roofs are covered with paintings glorifying our ancient culture and deities. Inside the main temple, there are over 70 pillars and out of them, there is one that does not rest on the ground!  This is a mystery that engineers have no answer to! It is believed if you move that pillar, all the pillars move too.

The temple complex is located on a low-lying hill. The temple, enclosed by two walls  can be divided into three sections – the Natya Mandapa (dance pavilion), the Ardha Mandapa and the sanctum. The ceilings of the Natya and Ardha Mandapa are covered with beautiful panels which depict scenes from epics like the Mahabharata, Ramayana, and the Puranas. The most impressive among all these panels is the one that depicts the wedding of Lord Shiva and Parvati Mata. On one side of the temple is an unfinished Kalyan Mandapam (Wedding Hall). It is said the king stopped construction midway because of the excessive expenditure. At the back side of the temple is a huge Shivling (Nagalinga) with a hooded multi-faced Naga (Cobra).

While visiting the Lepakshi temple, don’t forget to wear decent clothes. And don’t carry leather bags or belts, etc. However, temple authorities permit photography inside this temple so one must carry a camera.

Moreover, one should prefer to wear a standard piece of clothing to the temple. Temple authorities prohibit clothing items like jeans, t-shirts, shorts and skirts etc within the temple premises.

A giant footprint known as Durga Padam can be seen here. Legend says it is Sita Maa’s. It is always wet, as if being constantly washed. The source of water is a mystery. There is a small temple dedicated to Lord Ganesh on the premises. Chambers built for meditation can be accessed from the corridors. There is a unique leafless tree in the compound that has reportedly been around for ages. Besides all this, there is a lot more to see in this temple. This temple is in fact a living tribute to the skills, mastery, and craftsmanship of the temple builders of ancient and medieval India. 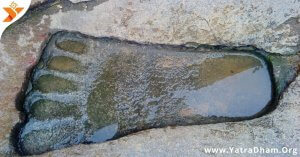 Shopping in Lepakshi can be a great experience. Lepakshi is famous for its traditional crafts. You can shop for Banjara embroidery items, brass artifacts, Kalamkari paintings and Cherial scroll paintings, cotton and jute floor mats, and much more.  Kids will simply love the Kondapalli toys made from softwood.

Where to Stay in Lepakshi

There are a number of hotels and guest houses to suit all budgets in and around Lepakshi. One can also opt for a day trip from Bangalore.

How to reach Lepakshi

The nearest railhead is Hindupur Railway Station, about 14 km from Lepakshi.

Bangalore Airport is about 100 km from Lepakshi.