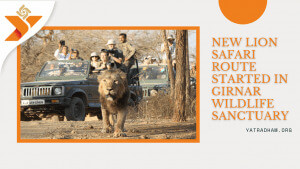 Gir – Home of the Asiatic Lion

Girnar is the home of the majestic Asiatic Lion. The lions nearly became extinct due to excessive hunting in the days of British Rule, but were saved after the Ruler of Junagadh realized the seriousness of the situation and banned hunting.

Other mammal species in the forest include Spotted Deer, Sambar, Nilgai, Chousinghas (four-horned antelopes), Chinkaras, Crocodiles, and leopards that are rarely seen. There are about a thousand human beings too, living in harmony with wildlife and nature inside the forest area. Most of the population here was relocated in the 1960s and 70s.

Devalia Safari Park is a fenced-off part of the sanctuary where Safaris are conducted presently. Sightings are guaranteed but the thrill and excitement are missing.

New Safari Route started on the 26th of January 2021

The park authorities have announced the Lion Safari Route Started in Girnar that promises a new experience with much more thrills and excitement. This is a completely new zone for sighting lions and was off-limits until now. The Safari will start from Indreshwar in Junagadh and go through Jambudi to Paturan and return the same way. Tourists will be able to travel 13 km deep inside the forest. The route is on the outer periphery of the forest and spotting wildlife is almost guaranteed. Local villagers have been roped in to act as guides and have been trained in Sasan. The safari is more of a nature trail which also increases awareness about the coexistence of humans, wildlife, and nature.

As of now, the Forest department has allowed eight trips daily. Four in the morning and four in the afternoon. Eight permits will be issued daily. Six persons plus a child can go on one permit.

The cost of a permit will be INR 800/ on weekdays and INR 1000/ on Saturdays and Sundays. An additional INR 400/ will have to be paid to the guide per trip.

Permits are currently available in Indreshwar presently. An online facility to book permits will be available soon.

The Safari will not be conducted during the annual Girnar Parikrama and Shivratri Mela.

As mentioned earlier, the new Safari route will start from Indreshwar in Junagadh. This is the Western entry point of the National Park. Besides promising a thrilling new experience, the advantage of this route is that it will provide a direct railhead for tourists who can now come directly to Junagadh by rail. This will also lighten the load on the Sasan entry point. Another advantage is the tourist will be able to visit  Junagadh and visit numerous historic and religious sites, besides Girnar Hill.

Are you Visiting SasanGir And Junagadh as well and Looking for Family Stay? Then don’t wait! Choose from our selected Best Dharamshala In Sasan Gir and Junagadh