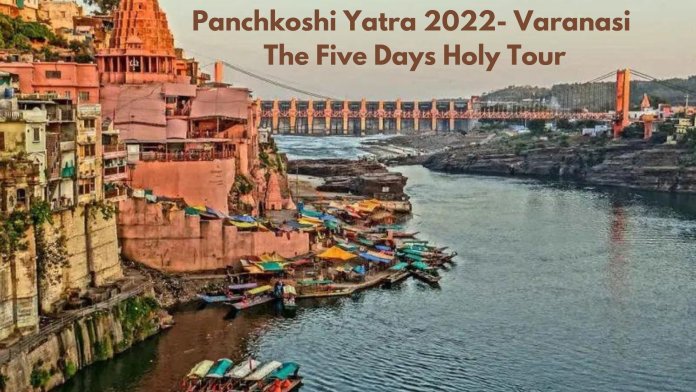 The Panchkoshi Yatra is a 13th-century journey (yatra) that travels the holy city of Varanasi. as one travels the road clockwise in a circle, keeping the city on one’s right, the city itself becomes both a sacred image and temple.

Below you can find all the details about Panchkoshi Yatra 2022 and the best places to stay in Varanasi while performing the yatra.

Panchkosh Yatra will continue till the 8th of November on the banks of the Narmada River journey will end.

After bathing in the kurang river and visiting Badud village, Badkeshwar there will be a rest of the journey at Toksar on November 5.

The next day, the 6th of November after visiting Gomateshwar, crossing the Narmada river by boat, and visiting Vimleshwar the night will be spent at Badwahvia Ramgarh.

After darshan from Nageshwar, the Yatra will reach Siddhavarkoot on November 7.

The yatra will reach Omkareshwar on November 8 from Siddhavarkoot after taking the Narmada bath via Omkareshwar dam.

This journey will end after the darshan of Omkar Parvat parikrama.

Varanasi is a holy place; people from all over the world come and visit it to explore and experience new things in their life Panchkoti yatra is one of them. If you are ever visiting Varanasi you will have the best accommodations options in Varanasi which include the best Dharamshala in Varanasi, and ashrams in Varanasi, just book them in advance and enjoy your holy and peaceful trip.

And also you will find the best Dharamshala in Varanasi in our list that is mentioned below so now you have a lot of options for your stay when you are visiting Varanasi, no doubt they are the best of all.