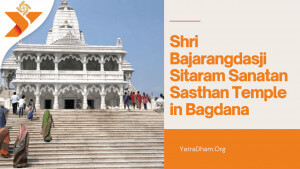 Bajrangdas Bapa, also known as Bapa Sitaram is the very soul of Saurashtra. Though He has left His earthly body, He still lives on in the hearts of millions of devotees. Bajrangdas Bapa was born in Adhewada, near Bhavnagar, and achieved total spirituality at a very early age. He spent some years visiting different places including Ayodhya, Surat, Palitana, and the Nashik Kumbh Mela. He came to Bagdana in 1941 and began living in a small Madhuli. In 1951 He built the ashram, which developed over the years.

Different Shrines in the complex

There are no specific timings. You may visit the temple any time you want.

Places to visit in Bagdana

Bhavnagar Railway Station is 72 km   from the Ashram

Bhavnagar Airport is 78 km from the Ashram