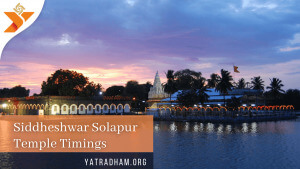 Almighty Shri Siddheshwar Temple Timings in Solapur in Maharashtra, India is one of the most beautiful temples in not only Maharashtra but in the whole of India. This pristine and immaculate temple is located on a serene lake that beacons as the icon of the Maharashtra pilgrimage.

According to the mythological legends, Lord Siddheshwar is a unique form of the sentient being that can manifest himself as both Lord Shiva and as Lord Vishnu. It is believed that Lord Siddheswhar was reincarnated on this mortal earth to unify the Hindu faith of both Saivite and vishnuvite sects. History tells that a certain saint of Srisailam temple upon receiving a divine revelation from his guru traveled to Solapur to establish this temple. The saint was called Siddharameshwar. This temple was built by him alone and dedicated to Lord Shiva in front. He is revered as a prophet of the Lingayat religion and the keystone for Solapur’s prosperity.

The temple complex has 68 small shrines for Lord Shiva and many other deities such as Lord Vishnu, Nandi, Rukmini, and many more. The temple also houses the tomb of burial of the saint Siddharmeshwar. The main attraction of this temple though is the Siddheshwar Lake. The Lake is huge and the water is as still as it is clear. There are many water activities going on the banks but what attracts the tourists most is the dazzling reflection of the lighted Siddheshwar Temple on the lake during the evenings and during the festive seasons.

How to reach Solapur Siddheshwar temple?

By Air
The nearest airport is at Solapur which is 7 Km away.

By Train
1. The nearest railway station is Solapur which is 3 km away.
2. Solapur is well connected with major cities.

By Road
The direct bus is available from the bus station.

YatraDham.Org is the only portal where you find the best accommodation options that go well with your trip objectives,  Checkout Dharamshala in Solapur near Siddheshwar Temple