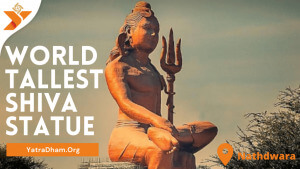 The newest tourist and spiritual attraction in Rajasthan has come up in Nathdwara near Udaipur in Rajasthan. Nathdwara is well known for its Shrinathji Temple and other temples of note. The giant statue of Lord Shiva named The Statue of belief is in its final stages of construction. It is expected to be inaugurated in January 2021. Located in the Ganesh Tekri area of Nathdwara the Statue will reach a height of 351 feet, making it the fourth tallest statue in the world.

Spread over 16 acres of land, construction was started in 2012. The base of the Statue of Belief is 110 feet high. Shoulder height is 260 feet and Lord Shiva’s Trishul reaches 351 feet. In front of the statue, there is a statue of Nandi which is 25 feet tall and 37 feet wide. Surrounding the statue are three herbal gardens spread over 52.300 feet. To add to the excitement there will be an amusement park with ATV rides, and Ziplines. Food parks, handicraft and souvenir stalls, a musical fountain, an open-air theatre, and more.

There will be three viewing galleries in the statue at 20 feet, 110 feet, and 280 feet. Four elevators will take visitors to different levels. Telescopes have been installed at the 250-foot level for distance viewing of the Aravallis. The Statue of Belief: World’s tallest Lord Shiva Statue itself is an engineering marvel that can withstand winds of up to 250 km per hour. The interior of the Statue of Belief: the World’s tallest Lord Shiva Statue is air-conditioned. A two-storied parking facility can accommodate 250 cars and 200 two-wheelers. Nathdwara is already the destination of hundreds of thousands of devotees. Now with the addition of the Statue of Belief, it will also be a major tourist attraction.

Timings and entry ticket prices have not yet been decided and will be announced soon.