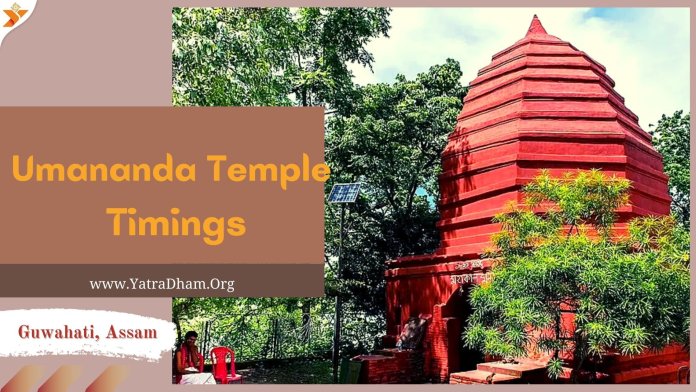 Umananda Temple is a Shiva temple located in the middle of the Brahmaputra river at Umananda Dweep (Peacock Island) opposite the office of the Deputy Commissioner of Kamrup or Kachari Ghat in Guwahati. The name of Umananda Temple comes from two words of Umanand Hindi. The first word ‘Uma’ is the name of Mother Parvati, the consort of Lord Shiva and the second word is ‘Anand’ which means happiness. Below you can find Umananda temple timings, ferry timings, how to reach, ropeway price, boat timings, online booking, history, and more…

Legends say that Lord Shiva lived here in the form of Bhasmuk. According to Kalika Purana, Lord Shiva scattered the ashes (ash) at this place, he also transmitted knowledge to Parvati.

It is also believed that at that time, when Lord Shiva was busy in his meditation on this hill, Lord Cupid handled his yoga, after him the fire of Shiva’s anger from the ashes and hence the name of the water.

According to Hindu idols, the goddess ‘Urvashi’ who brought him ‘Kamakhya’ lived here. Therefore, the island on which this Umananda Temple is built is also called Urvashi Island.

The temple is situated on an island on the Brahmaputra river. Thus, the temple can be reached by ferry from Guwahati.

Both private and government boats are running from all Ghats to the temple. It takes 10 minutes to reach the temple.

Kachari Ghat –  close to Paltan Bazar, which is 2 Km away. Autos and Buses are operating from Paltan Bazar to Ghat.

When the Ahom king got this temple built in the year 1694, no Brahmin family was residing in Assam. That is why two families had come from Kannoj in Uttar Pradesh and to date, their generation looks after this Umananda Temple.  The rule of the temple was that no priest’s family would live on the mountain and this rule is followed even today. Even today there are a total of 16 priests in this  Umananda Temple and everyone’s family lives in Changsari, 20 km away from here.

After reaching the island, after climbing the stairs, you will reach the premises of Umananda temple. As soon as you get off the ferry near the hill, you will find an entrance. Nandi is sitting on either side of the door. There are stairs to reach the peak from the entrance.

On entering the temple premises, a small hut-like Ganesh temple with a tin roof is found. Devotees move towards the Umananda Temple only after first bowing their heads there.  As soon as Umananda enters the temple, Brahma and Vishnu are seated in the middle of a large hall adjacent to the main garbha planet, after worshipping Brahma and Vishnu, on moving forward, the temple’s face is found, the garbha planet is written on both sides of the door. And on the top of the bronze plate is an engraved picture of Lord Shiva. From here you enter the main womb planet.

A monolithic lamp is burning inside the womb, in which one liter of oil burns daily. This lamp has been burning since the day Umananda Temple was built. The priests of the temple say that in the Dwapar era, Guwahati was known as Pragjyotish Pural. At that time Brahmaputra flowed from the north side of this hill. On the right, there lived a merchant who had many animals. Among the same animals, a Kamdhenu buffalo always used to come to this mountain to give milk. When the merchant followed her, she saw that she gives milk under a bael tree. When the merchant excavated that place, Shivling appeared there. The same night, Lord Shiva appeared in the merchant’s dream and ordered them to build a temple there.

And on the same night due to a heavy earthquake, the flow of Brahmaputra was divided into two parts and that hill remained in the form of an island in the middle of Brahmaputra. When the water in the river receded, the merchant came there and got a temple built. After that, with time, the temples kept on being built and broken but still, the Umanand Temple is standing there.

The nearest airport is Guwahati Airport at a distance of about 22 km from Umanand Mandir.

For more details connect us at YatraDham.Org.

Ambubachi Mela Festival in Kamakhya Temple despite of floods in Assam