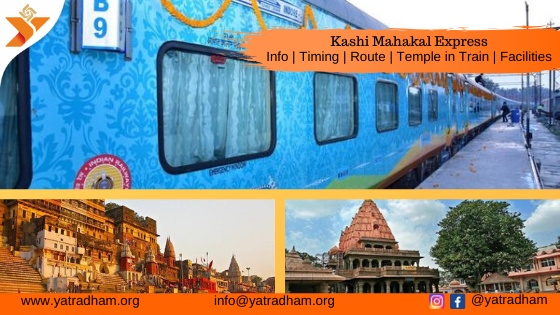 This train will run between Kashi Vishwanath at Varanasi, Mahakaleshwar at Ujjain and Omkareshwar near Indore.

Kashi Mahakal Express train will be having 2 routes:

Kashi Mahakal Express will be bi-weekly service via Sultanpur-Lucknow route.

The train will depart from Varanasi around 02.45 PM every Tuesday and Thursday.

Similarly, the train will start from Indore at 10.55 AM every Wednesday and Friday. The train will reach Varanasi at 06.00 AM the next day.

The train will run every once a week via Prayagraj. Kashi Mahakal Express will depart from Varanasi at 3.15 PM every Sunday and will reach Indore at 09.40 AM the next day.

Same way, the train will depart from Indore at 10.55 AM every Monday and will reach Varanasi at 05.00 AM the next day.

Kashi Mahakal Express train journey will cost Rs.1951 in a one way journey from Varanasi to Indore.