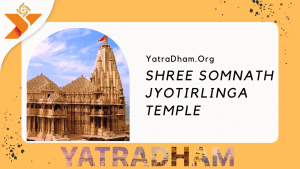 Shree Somnath Jyotirlinga Temple, also called Somanātha temple or Deo Patan, is located in Prabhas Patan, Veraval in Gujarat, India. One of the most sacred pilgrimage sites for the Hindus, they believe it to be the first among the twelve Jyotirlinga shrines of Shiva.

Shree Somnath Jyotirlinga Temple is first among the twelve Aadi Jyotirlings of India. It has a strategic location on the western coast of India.

Ancient Indian traditions maintain a close relationship of Somnath with release of Chandra (Moon God) from the curse of his father-in-law Daksha Prajapati. Moon was married to Twenty-Seven daughters of Daksha. However, he favoured Rohini and neglected other queens. The aggrieved Daksha cursed Moon and the Moon lost power of light. With the advice of Prajapita Brahma, Moon arrived at the Prabhas Teerth and worshipped Bhagvan Shiva. Pleased with the great penance and devotion of Moon, Bhagvan Shiva blessed him and relieved him from the curse of darkness. Pauranic traditions maintain that Moon had built a golden temple, followed by a silver temple by Ravana, Bhagvan Shree Krishna is believed to have built Shree Somnath Jyotirlinga Temple with Sandalwood.

The research based on ancient Indian classical texts shows that the first Somnath Jyotirling Pran-Pratistha was done on the auspicious third day of the brighter half of Shravan month during the tenth Treta yug of Vaivswat Manvantar. Swami Shri Gajananand Saraswatiji, Chairman of Shrimad Aadhya Jagadguru Shankaracharya Vedic Shodh Sansthan, Varanasi suggested that the said first temple was built 7,99,25,105 years ago as derived from the traditions of Prabhas Khand of Skand Puran. Thus, this temple is a perennial source of inspiration for millions of Hindus since time immemorial.

The Moon God is said to have been relieved from the curse of his father-in-law Daksha Prajapati by the blessings of Bhagvan Somnath. In the Shiva Purana and Nandi Upapurana, Shiva said, `I am always present everywhere but especially in 12 forms and places as the Jyotirlingas`. Somnath is one of these 12 holy places. This is the first among the twelve holy Shree Somnath Jyotirlinga Temple.

The later sources of history account for several desecrations by Muslims invaders during the eleventh to eighteenth century A.D. The temple was rebuilt every time with the reconstructive spirit of the people. The modern temple was reconstructed with the resolve of Sardar Patel who visited the ruins of Somnath temple on November 13 1947. The Then-President of India, Dr. Rajendra Prasad, did the Pran-Pratistha at the existing temple on 11 May 1951.

Other spots in the temple are Shri Kapardi Vinayak and Shri Hanuman Temple in addition to Vallabhghat. Vallabhghat is a beautiful sunset point. The temple is illuminated every evening. Similarly, the Sound & Light Show “Jay Somnath” is also displayed every night during 8.00 to 9.00, which allows the pilgrims an ethereal experience in the backdrop of grand Somnath temple and the holy wave sounds of the Ocean.

Ahalyabai temple is also close by, which was built by the queen mother Shri Ahalyabai Holker during 1782. This temple maintained the Pooja Parampara of Bhagvan Shiva during the hostile political conditions.

Note: Mobile, Camera & electronics types of equipment are not allowed in temple premises

The following poojavidhis are performed at Somnath Temple. Kindly contact poojavidhi counter at the temple. General or specific donation or Ornament/Vastra bhet is also accepted. The Ladu prasadi, Gangalal, Prasadivastra, and other pooja samagri are available at the counter.

You can Book your Online Donation and Puja Vidhi on somnath.org

How to reach Somnath

Somnath itself doesn’t have an airport but is connected to multiple cities via the Aerodrome at Diu in the union territory Of Daman and Diu. However, there is only one flight daily operated by Air India Regional. Also, other airports are fairly close by such as the Porbandar airport which is about 120 km and the Rajkot Civil Airport, which is about 160 km away. Porbandar has flights from Mumbai as well as other cities. Rajkot is a much bigger airport that is also serviced by multiple airlines such as Air India and Jet Airways.

Buses are the best mode of travel to Somnath from the cities nearby as there are multiple options available. Somnath is surrounded by many small towns and cities which are connected well by bus services, both Non-ACs as well as luxury AC buses. Air-conditioned buses from Diu to Somnath will cost 300 per person. Bus fares from other close-by places such as Rajkot, Porbandar, and Ahmedabad are also widely available and operated by private bus owners. These are priced reasonably and vary only by km travelled and the quality of the buses.

The closest train station from Somnath is the Veraval Railway Station, which is well connected to the major cities of the region such as Mumbai and Ahmedabad and has 14 pairs of trains to and from important cities daily. The Veraval staion is only 5 km from the city of Somnath and has daily trains plying from all major cities.

7 Stages of Lord Krishna in Gujarat - The 80 years Journey

Top 7 Temples in Gujarat | Timings, Accommodation, How to reach