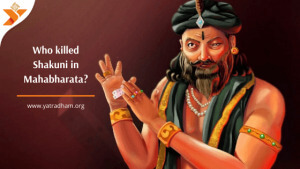 Contents show
Who was Shakuni?
Who killed Shakuni?
Interesting facts about Shakuni:

Considered as the main villain of the epic Mahabharata, Shakuni was Gandhari’s brother. As you know, Duryodhana was Gandhari’s son. Gandhari was the only sister of Shakuni. Shakuni was quite close to Gandhari and was not happy about her marriage with Dhritarashtra.

Shakuni is often recognized as the mastermind behind the Kurukshetra War. He was an extremely talented man but also a devious man.

The original text of Mahabharata mentioned Shakuni as the personification of Dvapara Yuga.

Sahadeva, one of the Pandavas killed Shakuni.
Sahadeva killed Shakuni on 18th day of Kurukshetra War. He had pledged to kill Shakuni as revenge for Draupadi’s insult by Kauravas.

For such information about the different Characters of Mahabharata and Ramayana visit our latest Blogs on Yatradham.Org/Blogs.