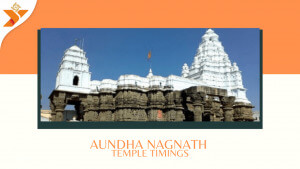 Aundha Nagnath Temple is an ancient temple of Shiva located in the district of Hingoli, Maharashtra, India. It is also considered one of the Jyotirlinga.

The total temple campus is spread over 60,000 sq. ft, the temple height is 60 ft, and covers an area of 7200 sq. ft. There are many other things to witness apart from its religious significance. The unbelievably beautiful carvings present in the temple are worth seeing. The architecture which the temple is presently made of is Hemadpanti architecture style. On the pious occasion of Vijayadashami and Maha Shivaratri, many pilgrims come to visit this place.

History of the Aundha Nagnath Temple

The history of Aundha Nagnath Temple dates back to the period of the Pandavas. Yudhishthira, the eldest among the Pandavas, first built this majestic temple during his exile. It is also believed that Mughal Emperor Aurangzeb tried to raze down the Aundha Nagnath temple. But it is said that a swarm of bees attacked his men and Aurangzeb gave up and left the temple.

However, damages were made, to a certain extent, to this sacred Jyotirlinga. Later, Rani Ahalyabai Holkar, Queen of the Maratha Malwa Kingdom, repaired and renovated the temple.

What is the significance of Aundha Nagnath Temple?

It is a popular belief that the Nagesh Linga or the Jyotirlinga is the Adhya or the first Jyotirlinga on Earth. Devotees believe that by praying at this temple, they can protect themselves against all kinds of poisons.

This form of Shiva is Nagnath since he has a snake around his neck. This association with snakes has led to a belief that this Linga is very powerful and potent against negating the harmful effects of all poisons. Devotees have often sighted snakes with open hoods guarding the Linga.

The Aundha Nagnath temple is not just a beautiful architectural wonder with fascinating legends, but it is said to be a very important pilgrimage site, where devotees visit and worship the lord in large numbers.

How to Reach the Aundha Nagnath Temple

By Bus: MSRTC buses are available from major cities like Mumbai, Pune, Aurangabad, etc., to Nanded and Aundha Nagnath.

The timings of Aundha Nagnath Temple are as follows: