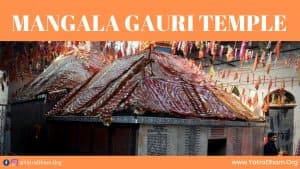 Mangala Gauri Temple in Gaya (Bihar) is yet another ancient Shaktipeeth. References to this temple can be found in various Puranas such as Padma Purana, Vayu Purana and Agni Purana. Besides this temple is mentioned in other religious texts too. Mata Sati ended Her life after the insult of Lord Shiva in Daksha Prajapati’s Yagya. Her body was cut into 51 parts by Lord Vishnu’s Sudarshan Chakra. The places where these body parts fell became Shaktipeeths. It is believed the breast portion of Sati Mata’s body fell at this spot. Magala Gauri Mata is known as the benevolent and loving Goddess. This temple is an ‘Upa Shakti Peeth’, one of the 18 Maha Shaktipeeths.

The present temple dates back to 1459 CE and was built on a hill called Bhasmakoot Parvat. The entrance to the sanctum is very small and devotees have to crouch to enter. An ‘Akhand Deep’ is kept lit in the temple for all 24 hours. It is said that the highest of blessings are received just by the darshan of this Akhand Deep. This Akhand Deep has been burning since time immemorial and has never gone off. The sanctum also has beautifully carved sculptures on the walls. Just outside the sanctum is a hall (Mandap). Outside in the courtyard is a place where Homas and Havans are done. There are other shrines dedicated to Lord Ganesh, Hanuman Ji, and Mata Durga on the temple premises. Another shrine dedicated to Lord Shiva has a Shivling enshrined in the sanctum and Nandi outside.

Mangala Gauri Temple is known for its miracles and devotees come with the greatest of expectations. Gaya is majorly a Vaishnavite center and this is one of the few temples of the Shaiva sect. It is also believed that a person can do his own after-death ceremonies (Shradh) whilst living in this temple. Also, Navratri is the main festival celebrated here. On Maha-Ashtami (the eighth day) there is a heavy rush of devotees. Meditation and prayer in this temple during Navratri give great benefits, according to devotees.

How to reach Mangala Gauri Temple