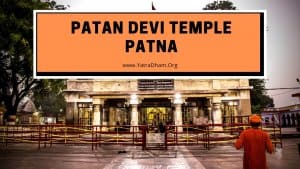 Patan Devi Mandir in Patna is one of the Shaktipeeths of India. It is one of the most ancient temples in India, with its history going back to the time of Ashoka the Great. It is believed Mata Sati’s right thigh fell at this spot.  This is the abode of Durga Mata. Patan Devi Temple was earlier known as  Maa Sarvanand Kari Patneshwari Mandir.

The story of Daksha Prajapati’s grand Yagya is well known. 51 Shaktipeeths were created as a result of it. Though the history of this temple goes back to the time of Ashoka the Great, the Patan Devi Temple in Patna as seen today was first built in the 9th century CE. Later in the 16th century, it was rebuilt by Raja Man Singh.

It is believed three Murtis were found in a pit adjacent to this temple in ancient times. The pit is known as Patan Devi Khand. These three Murtis of Mata Maha Saraswati, Maa Mahakali, and Mata Mahalakshmi are enshrined in the sanctum of the temple. They are always seen beautifully adorned with jewelry and silk garments. There is also a Murti of Vyomkesh Bhairava in the temple. Another Murti was found in the temple tank but has not been identified.

Two types of pujas and rituals are followed in this temple. One is the usual Vedic Puja done with the normal ceremonies and Mantras along with Aarti. The second type of puja is the Tantrik puja. This is done for ten minutes each day and devotees are not allowed inside while it is being done. Patan Devi Temple is an important center for Tantrik and Shakti Upasana. Besides these, there is a special Shringar Puja every Thursday.

Both Navratris (Also and Chaitra) are celebrated in the temple with enthusiasm and zeal. Devotees have great faith in this temple and believe that wishes will be granted. Patan Devi Temple is also of great importance for newly married couples and newborn children who are brought here for blessings.

How to reach Patan Devi Mandir

The nearest railway station is Patna Junction, about 8 km from the temple.

The nearest airport is Patna Airport, about 15 km from the temple.