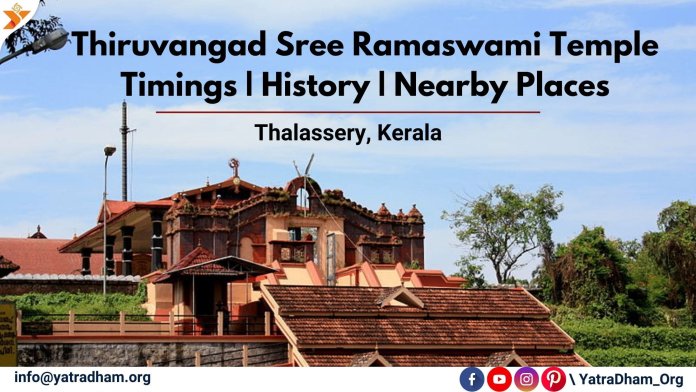 In its vicinity, several conferences were held between East India Company officials and local leaders, in which political agreements and treaties were signed. The temple has some interesting sculptures and Lithic inscriptions. The annual festival of the temple begins on Vishu day in April-May and lasts for seven days. The History Behind Sree Ramaswami Temple

Legend has it that Agastya Muni was on his way to the river for his customary bath when he encountered two demons named Neela and Shweta. Agastya Muni cursed them. At the request for his penance, Agastya Muni advised him to perform penance in two Shiva temples. The place where Neela performed tapas became known as Nileshwaram. Shweta did penance at Tiruvangad. They later came to be known as Nilarshi and Swarthi.

Cochin International Airport is the nearest airport located at a distance of 87 km from the Tiruvangad Shri Ramaswami Temple.

Kerala is well connected with other major cities;  Also many direct vehicles go to the temple.

Places To Visit In Kerala