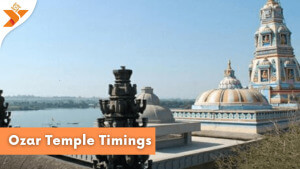 The Vigneshwara Temple or Vighnahar Ganapati Temple of Ozar is a Hindu temple dedicated to Ganesha, the elephant-headed god of wisdom. The temple is one of the Ashtavinayaka, the eight revered shrines of Ganesha in Maharashtra, India

The Vighnahar Ganpati Temple or also known as Vigneshwara Temple of Ozar (Ojhar/Ojzar) is a Hindu temple dedicated to the Lord ‘Ganesha’ or ‘Ganpati Bappa’ Son of Lord Shiva and Parvati, the elephant-headed god of wisdom. The Vigneshwara Temple or Vighnahar Ganpati Temple is popular for its Golden dome (Sonayacha Kalash) and its Deepmala’s (a stone pillar). Among Ashtavinayakas Temples, Vighneshwara temple is the only temple with a golden dome (Sonayacha Kalash) and pinnacle.

The ‘Ganesha’ form of worship here is called Vigneshwara/Vigneshvar/Vigneshwar – ‘Lord of obstacles’. Vighnaharta/Vignahara – ‘Remover of obstacles and is associated with the legend of Ganesha defeating Vignasura, the demon of obstacles. The deity is depicted accompanying his two consorts Siddhi (spiritual power), and Riddhi (prosperity).

The history of the Ozar Ganpati temple dates back many centuries. Mythology states that King Abhinandan had not given an offering to Lord Indra during his Maha Yagna. Angered, Indra sent Kaala in the form of Vignasura. He was defeated by Ganesha and agreed to never be present in places that were blessed by him.

The Vigneshawara temple was built by Chimaji Appa in 1785, after the conquest of Vasai fort by the Portuguese. He also covered the dome in gold and transformed it in 1833. In 1967 it was again reconstructed by a devotee, Appa Shastri Joshi. They say that no “Vighna” ever arises in places where Ganesha is invoked.

The daily poojas and rituals include,

Ozar is in the Junner Taluka in Pune District. Pune-Ozar distance is 85 km. On the Pune- Nasik Road on passing through Chakan, Rajgurunagar, and Manchar, one comes to the towns Narayangaon and later Junnar. Ozhar is 8 km from both Naryangaon and Junnar. There are many buses that travel on a regular basis to the Vigneshwara Temple Ozar. Also, the distance from Ozar to Nashik/Nasik is 145 km via Nashik-Pune NH60 Highway.

Pune and Talegaon are the two nearest Railway Stations and after that, another option is Kalyan Railway Station. The Pune station connects to major Indian cities.

Pune Lohegaon Airport, around 10-12 km from Pune, is the nearest airport. This airport is connected to all the domestic airports in India.

Where to stay near Ozar Ganapati Temple?

Here are the most recommended places to stay,

YatraDham.Org is the only portal where you find the best accommodation options that go well with your trip objectives Checkout Dharamshala in Ozar