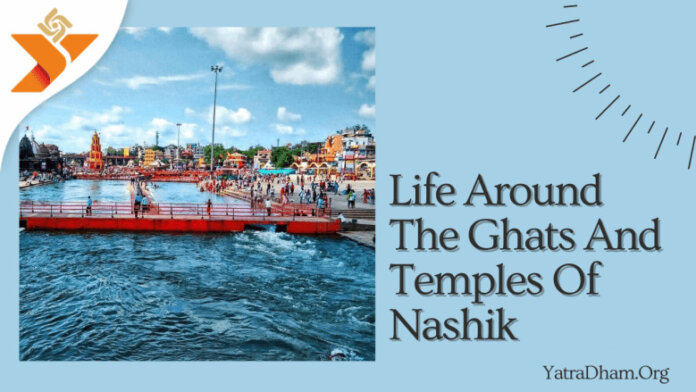 Nashik is an ancient holy city in Maharashtra, a state in western India. It’s known for its links to the “Ramayana” epic poem. On the Godavari River is Panchavati, a temple complex. Nearby, Lord Rama was thought to have bathed at Ram Kund water tank, today attended by Hindu devotees. Shri Kalaram Sansthan Mandir is an ancient shrine to Rama, while Rama and Sita are said to have worshipped at Sita Gufaa caves

A center of faith dotted with numerous religious sites and vibrant culture, Nashik has been a significant travel magnet and a pilgrimage site for time immemorial. The tourism shot north with the increased connectivity via road and air to Nashik.

The enchanting natural beauty of India’s Wine Capital just adds to the list of reasons why you shouldn’t be missing out on this city! Let’s take a look at some of the most popular places you can visit, and things you can do in Nashik Explore Life Around The Ghats And Temples Of Nashik

Trimbakeshwar Shiva JyotirlingaTemple is an ancient Hindu temple in the town of Trimbak, in the Trimbakeshwar tehsil in the Nashik District of Maharashtra, India, 28 km from the city of Nashik and 40 km from Nashik road

With the belief that Lord Rama and his consort Sita had bathed here, hundreds of pilgrims are drawn to the place to get a holy dip in the waters of River Godavari. To rest the souls of the dead, people often are seen to be scattering the ashes left after cremation in this place

The Ganga Ghat in Nashik was built by Ahilyabai Holkar. It is dotted with many temples dedicated to different Hindu gods and goddesses. The Ghat resonates with chants of people who gather here to offer prayers for the souls of their beloveds who have left their mortal bodies. During twilight, the Ganga Ghat looks especially spectacular when the holy waters of the river are floodlit with oil lamps and flowers offered by the pilgrims.

Among many temples of Lord Shiva in Maharashtra, this one is considered to be among the oldest in Nashik, the beauty of which is blended with the presence of Nature in River Godavari. The idol of Nandi – the Bull of the Lord faces the temple in a pose of overlooking the abode of God. The festivals of Maha Shivratri and Shravani Somvar are celebrated here with great zeal, emphasizing the architectural marvel this temple is symbolic of.

Sardar Rangrao Odhekar of Peshwa built the 70-foot-high temple in 1788. It was built with black stones brought from the mines of Ramsey Hill and engaged around 2000 workers in building the temple over 12 years. The gold-plated copper peak on the temple looks beautiful during the day and evening. Idols of Lord Rama, Sita, and Laxman, are beautifully adorned with flowers and ornaments. The building stands at the center of a walled fence with 96 pillars. Located on the banks of Godavari, the temple is known as Kalaram Mandir because the idol of Lord Ram is black in complexion.

Constructed in 1747 in typical Mayan architectural style by Naroshankara Rajebahadur, this is another fine example of dedication to Lord Shiva. This is among those fine places where Hinduism as a way of life could be studied in the works of art present.

With the belief that Lord Rama and his consort Sita had bathed here, hundreds of pilgrims are drawn to the place to get a holy dip in the waters of River Godavari. To rest the souls of the dead, people often are seen to be scattering the ashes left after cremation in this place.

Are you planning to visit Delhi and looking for options to Stay with your Family? Then don’t wait! Choose from our selected Dharamshala in Nashik  and book your vacation with YatraDham.Org