“Govardhan” or “Giriraj Ji”  – the name itself reminds us of Lord Krishna as one of his names is Shri Govardhannathji! Since childhood, every one of us has heard the beautiful story of Indramaanbhang Leela many times and we surprise ourselves as to how a child lifted Shri Govardhan Parvat for seven days or how a child killed so many Asuras? In this blog, we take you to the best Govardhan Parikrama places that come in parikrama marg, distance to cover those places, and best time to do parikrama.

Vraj Bhumi is the only sacred place where you can see the location of all those leelas of shri Krishna that resides in the district of Mathura, Uttar Pradesh. You are one of the luckiest people if you’re planning to visit there and willing to feel the existence of Lord Krishna at every corner of the Vraj!

Every day, thousands of devotees come for Govardhan Parikrama. Every place of the vraj bhumi is the witness of the divine beauty of Lord Krishna. Though there are more than five thousand temples there, it is difficult to list some of them! It will require more than thirty days if a person wants to visit every corner of this place.

Still, we’ve tried to list out the best places that can’t be skipped:

In order to visit all these places, you need to find accommodation at Jatipura as all these places are nearer to Jatipura and which is also known as Govardhan village. Check out the best places to stay in Jatipura from where you can even see Govardhan hill and the aesthetic glimpse of Vraj. 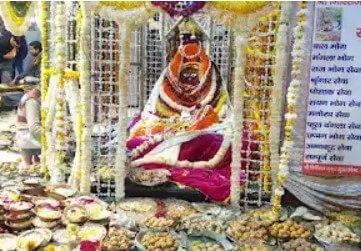 The first place you need to visit before starting Govardhan parikrama is called Mukharvind where we take the permission of Shri Girirajji for the Parikrama and offer him milk that’s called Giriraj Puja. This place is introduced by Jagadguru Shri Vallabhacharya Ji who is the founder of Pushtimarg.

Though there’s always too much rush, you’ll find the inner peace in front of Shri Giriraj Bava that can never be described in words.

In front of the Mukharvind there’s a Baithakji of Shri Vallabhacharya Ji and from there, a few steps ahead, bow down to the “Dandvati Shila”. Generally, people do dandavats and request his permission to see the temple residing at the top of the peak of Govardhan Parvat.

There’s a mystery in the white temple. According to legends, Shrijibava arrives there from Shrinathji temple in Nathdwara through the tunnel. You can see inside the tunnel after asking Mukhiya Bava.

It’s the only place from where you can see the entire Vraj and that looks like a lotus! Yes, if you check the map of the whole area of vraj you can easily identify the shape of the lotus. That’s why it’s also known as “VrajKamal”.

Do remember to start the parikrama in the early morning as it will be difficult to complete if the sun heat arrives while doing parikrama.

You can choose any of the options from

“No, I don’t want to leave Vraj. If I can’t visit Ganga then I’ll manifest the Ganga here!” said Lord Krishna when he slew one of the mightiest demons of Kans who came in the form of a bull. As per the Hindu region, the cow is considered holy, and it is said that crores of God Goddesses reside in a cow. So, Vrajvasis insisted Lord Krishna to have a holy bath in the water of river Ganga to purify himself for committing the sin of killing one of the demons who came in the form of a Gauvansh. In this whole Leela, Lord Krishna manifests the Ganga itself in Vraj bhumi and takes a bath in its sacred water!

Moreover, you’ll be surprised after reading the other story of Mansi Ganga. It is said that the Mansi Ganga is full of milk instead of water and if someone takes a bath daily for six months with faith, he would see it in the form of milk!

One of the divine baithaks of Shri Vallabhacharya Ji is situated at the sacred ghat of Mansi Ganga and that ghat is also known as Vallabh ghat.

So, this mysterious, holy, and auspicious Mansi Ganga kund still exists in the Vraj and it takes hardly 6 minutes to reach there. Once you reach there, you can also find a temple of Mansi Devi- considered as one of the four main goddesses. The other three are Vrinda Devi, Yogmaya Devi, and Pataleshwari Devi.

Lord Krishna is known for his various leelas that attract everyone’s attraction. One of his fascinating Leela is “Daan Leela”. You can have a glimpse of this Leela in the form of carvings and idols.

Various sweets made out of milk are offered to the people who arrive from different places. Many devotees have taken a vow to visit Vraj every year and devotees from foreign countries arrive here on a regular basis, that’s the most surprising thing. I guess so!

Though there are more than 250 kunds in the whole vraj pilgrimage, every kund has its own unique history which is not only interesting but also mysterious.

Radha Krishna Kund is one of the calm and bustling places with captivated history. Once upon a time, Shri Radha and Lord Krishna were conversing about something and suddenly one question arrived in their mind – who is the most beautiful between both of them. At that time, Lord Krishna struck the ground with his lotus-like foot and all the river goddesses emerged there in the form of their sacred water! They saw each other’s faces on that holy water and the conclusion was there’s no comparison of their divine beauty! That kund is known as Krishna or Shyam Kund.

Later, goddess Radha and her friends also dug the floor which was filled with the water of Krishna kund known as Radha kund. One can easily differentiate the kund by its shapes as Radhaji’s kund is in the perfect shape and Krishna’s kund shape is in zig-zag like his mischievous character!

You’ll feel extreme peace and relaxation by having a glimpse of this place. 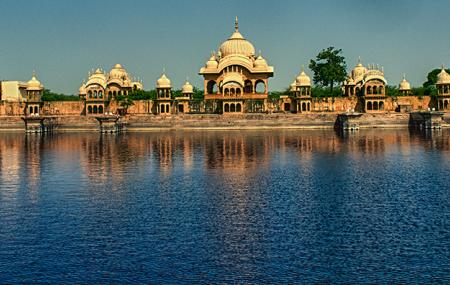 Kusum Sarovar is one of the most admired places in Jatipura. It is situated between Radha kund and Govardhan hill. The place gives the best example of Rajasthani carvings and monuments with tranquil surroundings.

The place is full of beautiful flowers, kadamba trees, and extraordinary architecture. As per the tells, Krishna used to play hide and seek here with his mischievous friends, and Shri Radha rani used to come here to pluck flowers but with the secret intention of meeting Krishna!. Once while collecting flowers, Radhaji’s dress got stuck in the thrones and the gardener of that place came to help her. Let me unveil the secret of that gardener first – so, Lord Krishna came to help disguised as Gardener!

This spot can also be found in many movie shots as it is famous because of its spirituality as well as its fascinating views.

Usually, visitors do the parikrama barefoot so it can be done during the daytime in December to March and April to November in the nighttime. As the temperature increases in Uttar Pradesh during summer.

The entire Govardhan Parikrama is around 23 km. Usually, it takes 5-6 hours to complete the parikrama.

It is the best place for the one who is in search of spirituality and has a desire to feel the glimpse of Lord Krishna. Though it is the pilgrimage of Mathura, Uttar Pradesh, you can find the best luxurious places as well as dharamshalas as per your requirement. Yatradham is here to help you find the best accommodation in jatipura! So, feel at ease and say Radhe Radhe 🙂

Vrindavan a Jewel of Brij Bhoomi

I need some guidance please?

What are the best options available for travelling from ShreeNathji (Nathwara) to Jatipura (Vraj) with my elderly and disabled mother?

Any guidance provided will be greatly appreciated.