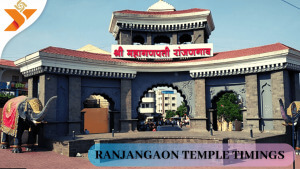 The Ranjangaon Ganpati Temple or well known as Mahaganpati of Ranjangaon has located in Shirur Taluka about 51.5 km (via Pune – Ahmednagar Highway – in 1 hr 31 min) from Pune. This is the eighth temple visited by devotees who set out on the divine Ashtavinayak tour/Darshan. The idol at Ranjangaon is of Mahaganpati, the most powerful representation of Lord Ganesha. In the events of Ganesh Jayati days, lots of small shops here for shopping and the sweet Prashad (Pedha) of Lord Ganesha Check updated Ranjangaon Temple Timings

As per a Hindu mythological legend, a sneeze by revered saint Grutsamad resulted in the creation of a lad named Tripurasura. He learned the Ganesh mantra from his father & invoked Lord Ganesha, who granted him a wish to be the most powerful being whom nobody but Lord Shiva alone would be able to destroy, after which Tripurasura would attain salvation. Tripurasura became very vain & arrogant in getting this wish & proceeded to wreak havoc wherever he went. He first took over the netherworld and then the heavens, including Lord Indra’s abode. Even the most powerful Gods & Goddesses could do nothing to defeat him. He even cunningly got a boon from Lord Shiva and took over Mount Kailash, the abode of Lord Shiva. Finally, he started creating mayhem on the earth itself. With all the worlds conquered, the vain Tripurasura started worshipping his own idol as he considered himself to be the most powerful being.

Terrified of Tripurasura, the heavenly Gods approached Lord Narada for advice. Lord Narada told them that since it was Lord Gajanan who had made Tripurasura so powerful, they should pray to Lord Gajanan only. Following this advice, the Gods recited the 8 Ganesha stotras which Lord Narada had taught them. These stotras are known as Sankatnashan [read the words of Sankatnashan stotra here]. Lord Gajanana, on being invoked, then said that whosoever said the Sankatnashan prior to trying to conquer/overcome all obstacles would be successful.

Subsequently, the Gods decided to request Lord Shiva to destroy Tripurasura since, as per the boon granted to him, he would die only at the hands of Lord Shiva. However, Lord Shiva was unsuccessful. He realized this was so because He had not recited the Sankatnashan stotra. Once He had recited it, He was immediately able to get a special beej mantra from Lord Gajanana & with a single arrow killed Tripurasura.

It is believed that the place where Lord Shiva invoked Lord Ganesha & defeated Tripurasura is Ranjangaon (the word Ranjan means the delighted one), prior to which it had the name Manipur.

Idol facing east is in a crossed-legged sitting position with a broad forehead & the trunk turned towards the left. Riddhi & Siddhi are on both sides of Mahaganapati.

Meditating on that idol is called Mahaganapati Dhyan. That idol is not taken out usually. Due to fear of Muslim invasion, in the good old days, the idol was hidden. That Ganesha is called Mahotkata. However, temple trustees have refused the existence of such an idol in the cellar.

The stone pillars of the old temple will be seen in the compound which indicates that the architecture of the original temple shows similarities to 9th or 10th-century architecture.

The timings of Chintamani Ganapati Ranjangaon Temple Timings are:

The temple is open from 5:30 am to 10 pm.
Devotees can offer the following pujas

Photography is not allowed in Ranjangaon Ganpati Temple.
Free Vehicle Parking is available near the temple.
The nearest Cities are Pune, Narayangaon, and Nasik

Regular buses from Pune Station & Shivaji Nagar are available. While going from the Pune – Nagar highway the route is Pune – Koregaon – then via Shikrapur. Rajangaon is 21 km before Shirur. From Pune, Ranjangaon is 50 km.

The nearest Railway station to Ranjangaon Ganpati is Yevat which is located and around 29.4 km distance.

Hadapsar Airport is the nearest airport which is 43.4 km from Ranjangaon.

YatraDham.Org is the only portal where you find the best accommodation options that go well with your trip objectives,  Checkout Dharamshala in Ranjangaon near  Temple