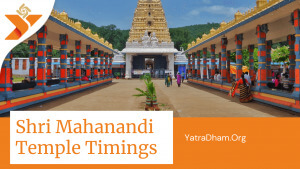 Shri Mahanandiswara Temple in Mahanandi is one of the nine temples in this area dedicated to Nandi. Lord Shiva’s beloved Bull. This ancient temple was first built more than 1500 years ago. It was renovated, rebuilt, and enlarged several times over the centuries. A notable feature of this temple is the three Pushkarnis (Fresh Water Pools) and the world’s largest statue of Nandi. The other eight Nandis are – Prathama Nandi, Naga Nandi, Soma Nandi, Siva Nandi, Krishna Nandi, Garuda Nandi, and Vinayaka Nandi. All of them are nearby.

The water that fills the Pushkarnis originates from below the Shivling in the Sanctum. This is a perennial flow, no matter what the season is. The water is crystal clear and said to have curative properties. The outflow of the water from the Pushkarnis irrigates 2000 acres of surrounding farmland. Astonishingly, the water is warm in winters and cool in summers.

Nandyal Junction is the nearest railway station, about 20 km from the temple.

The nearest airport is Hyderabad Airport. About 291 km from the temple.