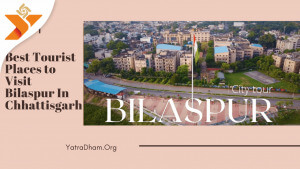 Things to Do in Chhattisgarh

Bilaspur in the state of Chhattisgarh and its surrounding areas are relatively lesser known tourist destinations, but a treasure trove of Temples, Gardens, Forests,  Archaeological sites, National Parks, and Sanctuaries. There are a number of places near Bilaspur that are certainly worth visiting. Explore Best Tourist Places to Visit Bilaspur In Chhattisgarh

Places to see in Bilaspur

Malhar is a small town about 35 km from Bilaspur. It was once a major city and trading center in the first century BCE. In the Ramayana, it has been mentioned as part of the North Kosala kingdom. There are two ancient Shiva temples that have been restored from ruins. There is also a museum here, alongside the ruins of Jain, Buddhist, and Hindu temples. One of the oldest Murtis of Lord Vishnu was discovered here and can be seen in the museum. Two temples of note are Ma Didneshwari temple and Pataleshwar Temple.

Tala is a small village about 30 km from Bilaspur. This place is famous for its half-ruined Temple complex. The Devrani – Jethani temples and the Rudra Shiva statue are a part of this complex. These ruins date back to the 5th century CE.

Pali is about 50 km from Bilaspur in the Korba district. This is the site of an ancient Shiva temple that is believed to be the personal worship place of King Vikramaditya. This temple was built in about 870 BCE and later repaired in the 11th century CE.

Ratanpur is about 30 km from Bilaspur and was once part of the Dakshin Kosala Kingdom from the days of the Ramayana. Ratanpur is well known for its Mahamaya Temple, also known as Kosaleswari Devi Mandir. The other temples of note are the  Ram Tekri Mandir and Budha Mahadev temples.

Achanakmar Wildlife Sanctuary is about 77 km from Bilaspur and part of the Amarkantak – Achanakmar Biosphere Reserve. It is also a Tiger Reserve under ‘Project Tiger. This sanctuary is home to the Bengal tiger, Indian Leopard, Gaur, Chital, Chinkara, Blackbuck, Wild Boar, Monkeys, and many other species of flora and fauna. The forest comprises mainly Sal, Bamboo, and Saja trees.

Amarkantak is about 115 km from Bilaspur and well known for its Narmada Udgam Mandir and other temples. This is where the Narmada and Son rivers originate. Sant Kabir Das Ji is believed to have meditated here. Amarkantak is also home to the ancient Kalachuri temples known as ‘Trimukhi’, dating back to the 11th century CE.

How to reach Bilaspur

Bilaspur has its own railway station which is connected to many cities in India.

Raipur Railway Station is another option, about 115 km from Bilaspur.

The nearest airport is Raipur Airport, about 135 km from Bilaspur.

Are you Visiting Bilaspur Check Best Dharmshala in Bilaspur

Kumbh Mela 2021 Updates and Points to Keep in Mind