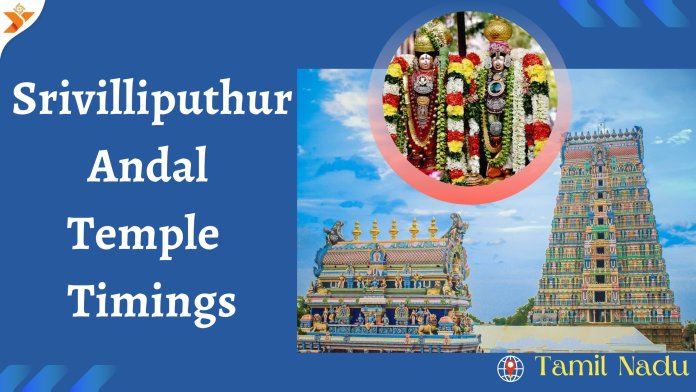 Srivilliputhur Andal Temple is more than 2000 years old. According to mythology, this place is considered very sacred due to being one of the dreams seams of the lord.

It is arguably one of the largest specimens of Dravidian architecture. In this Srivilliputhur Andal Temple, Lord is in a resting posture. In addition, the hall located just below the sanctum sanctorum is decorated with wooden carvings.

The two most important festival of Srivilliputhur Andal Temple is Aani Alvar Utsav and another one is Anikappu.

Devotees can take darshan of Srinivasa Perumal Temple from 7:00 AM to 7:00 PM.

Vadapatrasayanar Temple is open for darshan from 6:30 AM to 8:00 PM.

The history behind Srivilliputhur Andal Temple

Many centuries ago, Queen Malli was the ruler of this temple’s head, Srivilliputhur.  Villi and Kandan were the two sons of Malli queen.  When both of them were hunting in the forest, a tiger killed Kandan.  While sleeping in the forest, Vili was told by the Lord through Akashvani about what had happened to his brother.  According to this divine order, Villi established a city in the middle of the forest which was very beautiful.

How to reach Srivilliputhur Andal Temple

You can reach Srivilliputhur by road in several ways.  Along with bus service, Car private vehicle is also available here.

You will have to take a flight to Madurai as it is the only air destination to reach here.  From there you have to take private car services to reach Srivilliputhur.  Apart from this, you can also come from Chennai.

Places to visit in Srivilliputhur

Best accommodations are available in Tamil Nadu with online booking facilities at YatraDham.Org.