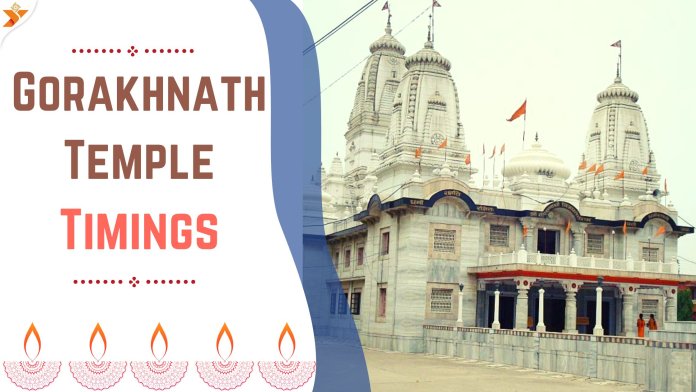 Gorakhnath Temple is located in Gorakhpur, in the state of Uttar Pradesh. This district is named Gorakhpur after the name of Baba Gorakhnath. The current Mahant of Gorakhnath temple is Shri Baba Yogi Adityanath.  On the occasion of Makar Sankranti, a month-long huge fair is held here, which is famous as ‘Khichdi Mela’. Special security was made outside the temple on the day.

This temple is very popular in Eastern Uttar Pradesh, the Terai region, and in Nepal. One of the legends associated with Guru Gorakhnath is that a devotee who chants the Gorakhnath Chalisa 12 times becomes blessed with the divine Jyoti or the miraculous flame.

Gorakhnath (Gorakhnath Math) is a temple of the Nath Math group in the Nath tradition. Its name Gorakhnath is derived from the medieval saint Gorakhnath 11th century who was a renowned yogi, who traveled widely across India and was also the author of texts as part of the canon of the Nath sect.

The Nath tradition was established by Guru Machendra Nath.  Gorakhnath temple is situated at the same place where he used to do penance and this temple was established as a tribute to him. The temple is named after Guru Gorakhnath who learned his penance from Matsyendranath, the founder of the Nath Sampradaya (group of monasteries).  Together with his disciple Gorakhnath, Guru Machhendra Nath founded the Yoga Schools which were considered very good schools for the practice of Yoga.

The Temple structure has been devasted several times. First, it was Alauddin Khilji, who destroyed the Gorakhnath temple in the 14th century, and later Aurangzeb, the Islamic ruler of India in the 18th century.  Despite the fact that its structure was destroyed twice, this place still retains its sacredness, its importance, and a sacred aura. It is said that the form and shape in which this temple is seen today were conceptualized in the second half of the 19th century by the late Mahant Digvijya Nath and the present Mahant Avadyanath.

Many government buses and private vehicles are available to go to Gorakhpur. The distance from Gorakhpur Bus Stand to Gorakhnath temple or Gorakhnath math is about 4 km. You can also go by Car.

You can go by train. The distance between Gorakhnath temple and Gorakhpur Railway station is 5Kms.

You can find clean and well-maintained rooms here. The accommodation is best for families. You can find food facilities nearby. For more details or online booking please visit below.

Places to visit in Gorakhpur