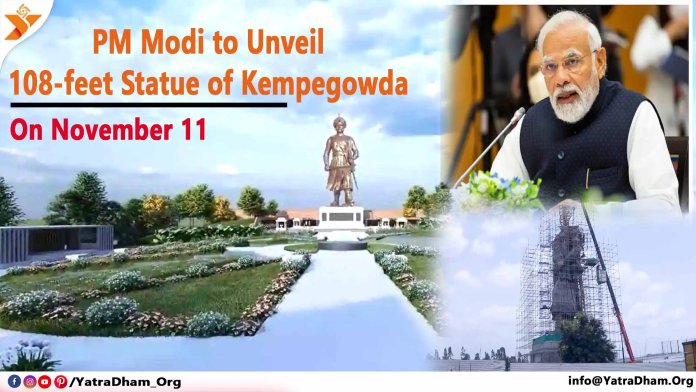 The Statue of Kempegowda will be 108-Feet tall and made of bronze. The Karnataka Government is spending ₹84 crores to erect the Kempegowda statue and to develop a Theme Park at the airport. Prime Minister Narendra Modi will unveil the 108-feet statue of Bengaluru’s founder Kempegowda. Ram Vanji Sutar, a Renowned sculptor and Padma Bhushan awardee, designed this statue. Sutar has also built the ‘Statue of Unity in Gujarat and the Statue of Mahatma  Gandhi in Bengaluru’s Vidhana Soudha. This will also be called the ‘Statue Of Prosperity’.

On November 11 Prime Minister Narendra Modi will inaugurate this statue, near the international airport of Bengaluru, Karnataka. A theme park will also be developed near the Statue Of Prosperity which will be a major attraction for tourists.

The people of Karnataka was demanding Kempegowda for a long time and this statue is named as Statue Of Prosperity. It is called the statue of prosperity because it will reflect how Bengaluru, which was built by Nadaprabhu Kempegowda achieved progress in every sector.

If you are visiting the Statue Of Prosperity and of course, you should visit because that is a beautiful place and Bangalore is no less than that so you will explore more about the place and will come to know many things. Here we are giving you the best options to stay you can always book from our site.