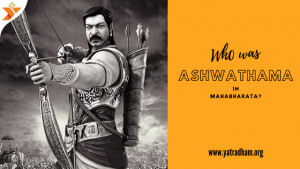 Ashwathama is one of the complex and underrated characters in Mahabharata. His story remains mostly unexplored even with a great role in the Kurukshetra War. Ashwathama’s complexity arises due to his final act of revenge in Kurukshetra. It was against the Kshatriya rules. At the end of the war, Ashwathama almost killed the entire future generation of Pandavas.

Ashwathama was Guru Dronacharya and Kripi’s Son. Kripi was the sister of Kripacharya. His name was Ashwathama because he cried like a running horse at the time of birth. Ashwathama means a voice like a horse. Dronacharya, as we know, was a guru of both Pandava and Kauravas.

As described in Mahabharata, Ashwathama was a tall, dark and talented warrior. Ashwathama was one of the seven Chiranjeevi (One who will never die).  Dronacharya gave birth to Ashwathama after his strong penance to Lord Shiva. Some consider Ashwathama as the son of Rudra, inheriting some of his qualities. Just like Rudra, it was impossible to beat him in the war when he is angry.

For more information and interesting facts about the Mahabharata and Ramayana, visit our latest Blogs at Yatradham.org/Blogs.