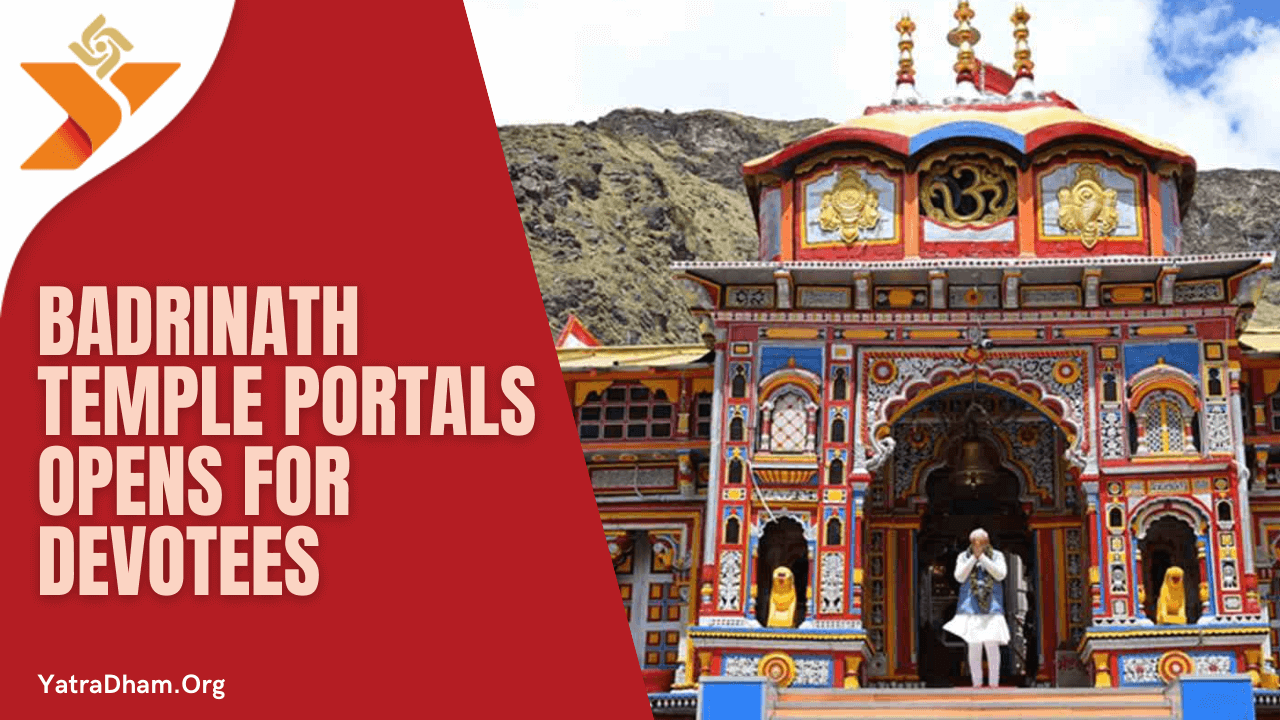 The Badrinath Temple Portals Opens for Devotees will soon be open for devotees after a long winter break of nearly six months. The Temple shut its doors just after Diwali last year and will reopen on the 15th or 16th of May 2021. As with every year, devotees are eagerly awaiting for this to happen.

Badrinath Dham is one of the more important pilgrimages in India. It is a part of the Major Chardham along with Jagannath Puri, Rameshwaram, and Dwarka and also a part of Chhota Char Dham along with Yamunotri, Gangotri, and Kedarnath. This is the place where Lord Vishnu meditated and Mata Lakshmi assumed the form of a giant Badri tree to provide shade for Her Lord. Such is the beauty of Sanatan Dharma.

Besides the Badrinath Temple, there are many other sacred places in and near Badrinath that are worth seeing –

These are near the Badrinath Temple. Adi Shankaracharya found the Shaligram Murti of Lord Vishnu in the Alaknanda River. He first enshrined the Murti in a cave near Tapt Kund. This is also the place where Narada Muni composed the ‘Narad Bhakti Sutra’.

Mana Village
This is the last village on the Indian side. A few kilometers ahead is the India – Tibet border. This is the place where Ved Vyasji wrote the Mahabharata with the help of Lord Ganesh. The cave he lived in is known as Vyas Gufa.

Saraswati River
There is a small stream flowing from the mountains near Mana village that merges with the Alaknanda 1 km ahead. This stream is believed to be the lost Saraswati river.

Vasudhara Falls
is an idyllic spot  6 km from Mana village and can be reached by a trek. Beautiful scenes of the glaciers and peaks all around can be seen from here. The height of the waterfall is about 400 feet.

While on the way or while returning is Joshimath, about 45 km from Badrinath. This is where Lord Vishnu’s Murti is kept during the winter months in the Narsinh Temple. Joshimath is also the location of Shankaracharya Math – Established by Adi Shankaracharya. There are two temples here – Lord Badri temple and Rajrajeshwari Devi temple.

Pandukeshwar is about 23 km from Joshimath and known for its Dhyan Badri Temple. This is one of the ‘Sapta Badri’ and Lord Vishnu can be seen seated in Dhyan Mudra.

The Chardham Yatra traditionally begins from Yamunotri and ends in Badrinath.

There are numerous pilgrims who do not undertake the complete yatra and go to one or two of the Dhams.

Are you planning to visit Badrinath and looking for options to Stay with Family? Then don’t wait! Choose from our selected Dharamshala in Badrinath and book your vacation with YatraDham.Org

Kumbh Mela 2021 Updates and Points to Keep in Mind