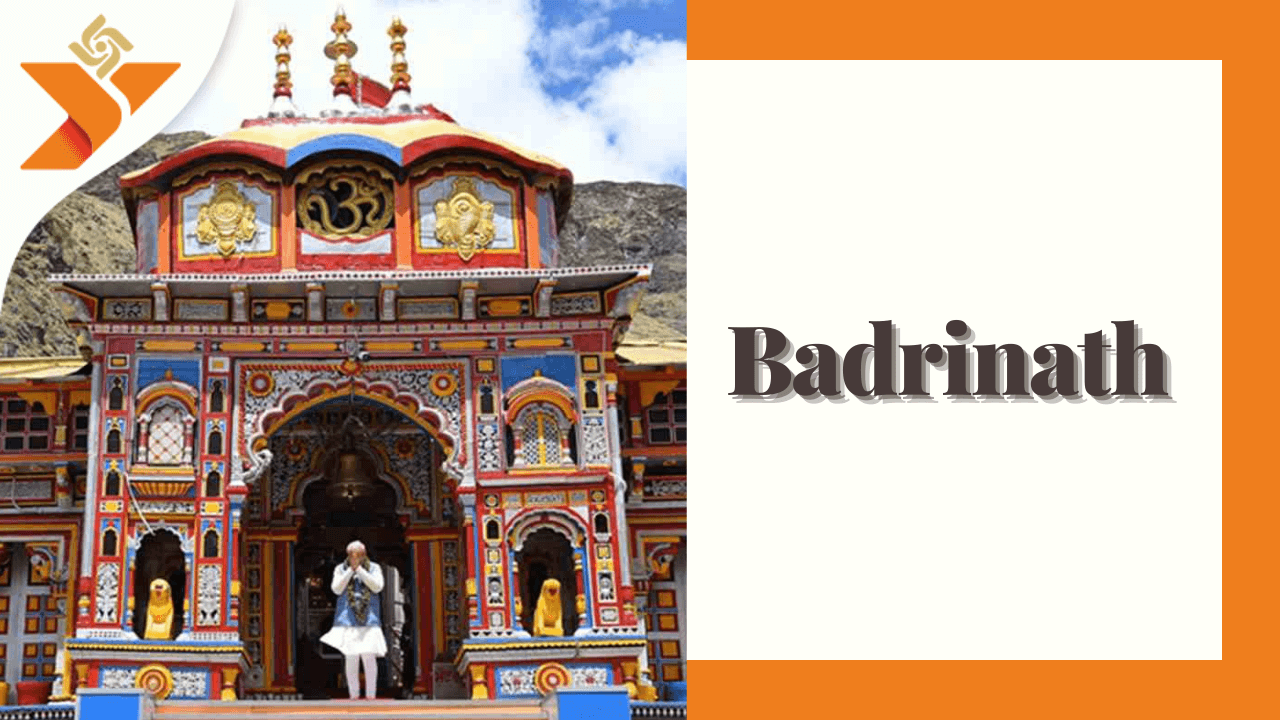 Badrinath, the Eternal Abode of Lord Vishnu is also known as Badrinath Dham and Badri Vishal. Badrinath is one of the Char Dhams of India along with Jagannath Puri, Rameshwaram, and Dwarka. It is also one of the Chhota Char Dhams of Uttarakhand with Yamunotri, Gangotri, and Kedarnath. Traditionally it is the last place to be visited on the Chhota Char Dham Yatra. It is the first of the Sapta-Badri temples. Badrinath Temple is also one of the 108 Divya Desams dedicated to Lord Vishnu. Finally, it is one of eight Swayam Vyatka (Self Appeared) Kshetras of Lord Vishnu. The area is known as Badrika Ashram.

In the early days of creation, Lord Vishnu came down to earth to meditate and do penance in a sacred spot between the Nar and Narayan mountain ranges. He sat down on His Asana and began, oblivious of the scorching sun. Mata Lakshmi saw this from Vaikunth.  She came down and took the form of a giant Badri tree to protect Her Lord from the heat of the sun. This gave birth to the name – Badri Vishal. Pleased with Her devotion Lord Vishnu named the area Badrika Ashram

Centuries later Adi Shankaracharya had stayed in this Himalayan region in the 8th century. He spent more than six years in different places. One day while bathing  in the Alaknanda river he discovered a black shaligram Murti of Lord Vishnu. He enshrined the Murti in a cave near Tapt Kund in Badrinath. He then built a small temple and established Badrinath as a pilgrimage. The temple has been renovated a number of times since then. The Murti was moved to the present temple in the 16th century by the king of Garhwal.

Badrinath – Subject of many Holy Texts

The significance of Badrinath is such that it finds mention in a number of Puranas, the Mahabharata, and other religious texts. The Bhagwat Purana says Lord Vishnu has been meditating in the form of Nar and Narayana since millenia for the welfare of all living entities. The Mahabharata says one can get salvation just by coming near Badrinath. The Skanda Purana says – ‘There are several pilgrimages and sacred sites in heaven and on earth, but there is none like Badrinath’. The Padma Purana says the area around Badrinath is full of spiritual treasures. The temple has also been written about in the Tamil text – Nalayira Divya Prabandham.

Badrinath temple or Badri Vishal is the first of five related shrines known as Panch Badri (Five Badris). The second is Dhyan Badri in Pandukeshwar. The third – Bhavishya Badri is in Subhai. The fourth Vridha Badri is in Joshimath. The fifth – Adi Badri is near Karnaprayag. The other two are Ardha Badri near Joshimath and Narasimha Badri in Joshimath.  Devotees prefer to visit all seven, or at least five to make their yatra complete.

The Badrinath Temple stands at an altitude of 10,200 feet above sea level on the banks of the Alaknanda River. It is located in between the Nar and Narayana range of mountains. This colorful temple has three main structures – the Sanctum, Darshan Mandap and Sabha Mandap. The black Shaligram Murti of Lord Vishnu is about 1 ft. in height. Lord Vishnu can be seen holding a Shankha and Sudarshan Chakra in two hands and two hands resting on His lap in Yoga Mudra. There are also Murtis of Kubera, Narada Muni, Udhava, Nar, and Narayana. Other Murtis include Mata Lakshmi, Garuda, and Nava Durga (Nine forms of Durga Mata)

Places to visit in Badrinath

Pancha Shila – These consist of Narada Shila, Markandeya Shila, Barahi Shila, Garud Shila, and  Narsinh Shila. They are sacred rocks on which sages have meditated and attained high positions.

Tapt Kund –  is a hot water spring adjacent to the Badrinath temple. The water has medicinal properties and devotees usually take a dip here before darshan.

Narad Kund – is near Tapt Kund. It is believed Sage Narad authored “Narad Bhakti Sutra”  on the banks of this Kund..

Mana Village  – This is the last village on the Indian side of the border.It is a traditional village known for its woolen garments and shawls.

Vyas Gufa – This is near Mana village and it is believed Rishi Ved Vyas composed the Mahabharata here with the help of Lord Ganesh.

Saraswati River – is known to have vanished thousands of years ago. A small stream flowing from the mountains near Mana village merges with the Alaknanda 1 km ahead and is believed to be the lost Saraswati river.

Vasudhara Falls –  is an idyllic spot  6 km from Mana village and can be reached by a trek. Beautiful scenes of the glaciers and peaks can be seen from here.

Bheem Pul – This is a natural bridge made by the Pandava Bhim by throwing a huge rock across the river. He did this to make a way for Draupadi to cross the river when they were on their way to heaven.

Charan Padukas – These are footprints of Lord Vishnu when He first put His feet down here. This place is about 3 km from Badrinath.

Mata Murti Temple – Located about 3 km from Badrinath, this temple is dedicated to Mata Murti. She was the mother of Nar and Narayana.A fair is organ-nised here on every Shravan Dwadashi and is attended by thousands of local people and devotees.

Brahma Kapal – This is a highly revered place and it is said Lord Brahma is always present here. This sacred site is favored for shradh rituals of departed souls.

Are you planning to visit Badrinath and looking for options to Stay with Family? Then don’t wait! Choose from our selected Dharamshala in Badrinath and book your vacation with YatraDham.Org