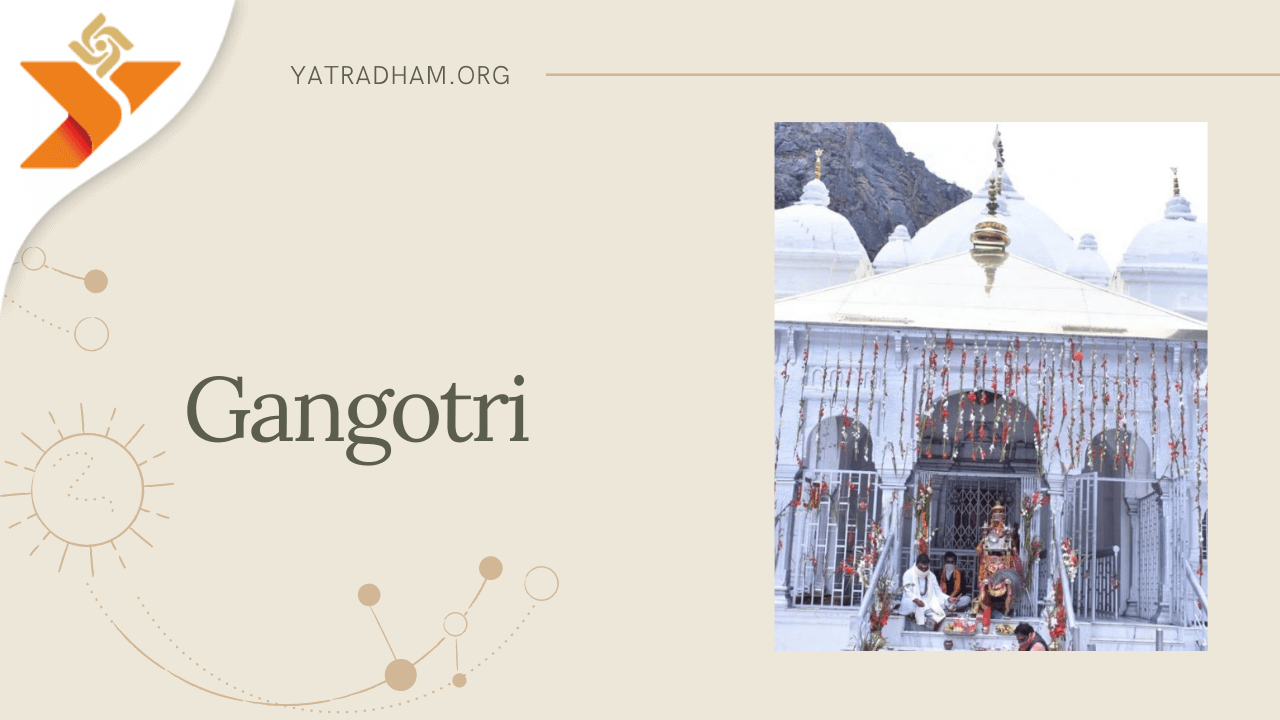 Contents show
About Gangotri
Why did Maa Ganga descent to Earth?
Gangotri Temple
Places to visit in Gangotri

Gangotri is the blissful and blessed place worshipped as the origin of the sacred Ganga River. This is where the temple dedicated to Maa Ganga is located amidst serene and peaceful surroundings. The actual origin of the river is in Gaumukh Glacier, about 18 km further up in the Himalayas. The river begins its earthly journey from a spout that is shaped like a cow’s mouth at the end of the glacier. Gaumukh can be reached only by a challenging trek and not many devotees can do it. For that reason, Gangotri is the place where the temple is located and prayers are offered to Maa Ganga. The river is known as the Bhagirathi here.

Why did Maa Ganga descent to Earth?

In the early days after the creation of the world, the earth was very different from what it is now. Those were the days when mighty kings ruled the world. They were saintly and protectors of Dharma. Devis and Devtas from heaven came down to Earth regularly. King Sagara was one such king. He had defeated many Asuras (Demons) to make the earth safe for the godly and the pious. As was the tradition in those days King Sagara organized a grand Ashwamedh Yagya to declare his supremacy on earth. A white horse was set free to roam all over the world after the completion of the Yagna. Anyone challenging it would have to fight the army which followed the horse. This army behind the horse also included the sixty thousand and one sons of King Sagara.

Lord Indra King of the Devtas was watching all this from heaven and was alarmed. He thought that if King Sagara became too powerful, His own throne in heaven would be in danger. Indra dev stole the horse and tied it outside Rishi Kapila’s ashram. The sons of King Sagara were furious when the horse went missing and started looking for it. After much searching they found it tied outside Rishi Kapila’s ashram. They stormed the ashram had Rishi Kapila who was meditating inside got disturbed and opened his eyes. The moment he opened his eyes all the sixty thousand and one sons instantly turned to ashes.

Many years passed and now King Sagara’s grandson Bhagirath was the king. He was greatly troubled and saddened by the thought that his 60,001 ancestors were not able to attain Moksha. He prayed to Rishi Kapila who said the only way to liberate those 60,001 souls was by asking Maa Ganga to descend to earth and wash away their sins. King Bhagirath prayed to Maa Ganga and performed penances for thousands of years. Pleased, Maa Ganga agreed to come down to earth. The only problem was that Maa Ganga’s force was such that the entire earth would be devastated if She landed on earth.

Mahadev comes to the rescue

To allow Maa Ganga to descend to the earth and keep it safe at the same time Mahadev kindly agreed to receive Maa Ganga in His Jata (Matted Locks of Hair). He would then release the waters of Maa Ganga in a controlled manner ensuring there would be no danger to earth. The place Mahadev chose was Gaumukh and thus Maa Ganga came to earth to purify anything She touched with Her waters. Maa Ganga not only washed away the sins of King Sagara’s sons but has been the very symbol of purity on earth. This is where Maa Ganga’s journey begins and continues for more than 2500 km to Gangasagar in West Bengal, where She merges with the sea. On the way, countless tributaries and other rivers join Her, but they all lose their name and form. Only the mighty Ganga Mata remains.

The temple dedicated to Maa Ganga stands at an altitude of about 10,200 feet above sea level not far from the river Bhagirathi in Gangotri. The temple’s simple and unassuming architecture makes it stand out. The white-colored temple is the highest symbol of purity and truth. Traditionally the temple opens on Akshay Tritiya and closes just after Diwali. The Puja and rituals in the temple are conducted by the Semwal family of Mukhba for centuries now. During the winter months, the puja and Murtis are shifted to Mukhba as much of Gangotri is snowbound.

Places to visit in Gangotri

Surya Kund is a sacred Kund dedicated to Surya Dev. Devotees unfailingly come here to pay their respects to the Sun God. It is near the Gangotri temple.

Bhagirath Shila – This is said to be the place where King Bhagirath prayed to Maa Ganga for the salvation of his ancestors. This too is not far from the temple.

Pandava Gufa – This is about 1 km from the temple. The Pandavas are believed to have stayed and prayed here in this cave while on their way to heaven.

Bhojbasa –  This is an idyllic village about 14 from Gangotri on the way to Tapovan.

Gaumukh Glacier. At an altitude of almost 12400 feet above sea level, this place can be reached by a trek only as there is no motorable road.

Gaumukh Glacier –  The actual source of the Ganga River, this place can also be reached by an 18 km trek. The glacier lies on the slopes of the Chaukhamba range and is about 30 km long. It is a place of celestial beauty.

Submerged (Jalmagna) Shivling – This is a Shivling in Gangotri that remains submerged in the Bhagirathi river and is visible only in winters. This is believed to be the place where Lord Shiva received Maa Ganga in His Jata.

How to reach Gangotri Temple

The nearest airport is  Jolly Grant Airport, Dehradun about 265 km away.

Where to stay in Gangotri

There are a number of Dharamshala and ashrams to stay in Gangotri. Click on the link below to know more details and book rooms.

Are you planning to visit Delhi and looking for options to Stay with Family? Then don’t wait! Choose from our selected Dharamshala in Gangotri and book your vacation with YatraDham.Org