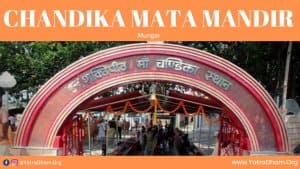 Chandi Mata Mandir in Munger (Bihar) is one of the Shaktipeeths of India. Located just outside the city, Chandika Sthan, on the banks of the Ganga River is considered as important as the Kamakhya Devi temple in Assam. Chandika Sthan is a center for Shaktism and Tantrik rites.

The Yagya of Daksha Prajapati

Daksha was the son of Lord Brahma. He was an ardent devotee of Lord Vishnu and had a strong dislike for Lord Shiva. His daughter – Sati was married to Lord Shiva. In due course, he was appointed ‘Prajapati’ of the world by Lord Brahma. To mark this occasion, he organized a grand Yagya. He invited all the Devi-Devtas, Rishis, Munis, and others to the event. He did not invite Lord Shiva and Sati. Even though She was not invited, Sati decided to go for the Yagya. When She reached the venue Prajapati Daksha pointedly insulted Lord Shiva. Sati was not able to tolerate this. She ended Her life by entering the sacrificial fire. When Lord Shiva heard of this, He was enraged beyond control. He destroyed the Yagya and beheaded Daksha Prajapati. He then took Sati’s body in His arms and started the destructive Tandav Nritya in the skies. This would lead to terrible consequences for the world and the heavens above. To prevent destruction, Lord Vishnu sent His Sudarshan Chakra which cut Sati’s body into 51 parts. These parts fell all over the Indian subcontinent. Each of the places where the body parts fell became a Shaktipeeth. Lord Shiva retired to Mount Kailash and went into a deep and long Samadhi.

The left eye of Sati Mata fell at this spot, and subsequently, it became a Shaktipeeth and a pilgrimage.

Munger is claimed to possess been founded by the Guptas (4th-century CE) and contains a fort that houses the tomb of the Muslim saint Shah Mushk Nafā (died 1497). In 1763 Mīr Qasīm, Nawab of Bengal made Munger his capital and built an arsenal and a number of other palaces. it had been constituted as a municipality in 1864.

The Story of Karna

Karna was the brother of the five Pandavas but was on Duryodhana’s side in the Mahabharata War. He was given the Kingdom of Anga by Duryodhana and was known as Angaraj. It is believed he used to worship Chandika Mata in this temple. Pleased with his devotion, Chandika Mata once gave him a large quantity of gold. Karna donated all the gold to be distributed among the poor and the needy. Karna was also known as ‘Danveer Karna’.

The Chandika Sthan temple is situated in a large complex on a hill. The sanctum is inside a narrow cave on the side of the hill. Much of the history of this temple is not known. In about 1990 the temple was renovated. Within the temple complex, there are other shrines dedicated to Kal Bhairava, Hanuman Ji, Durga Mata, and Kali Mata.

How to reach Chandika Sthan Temple