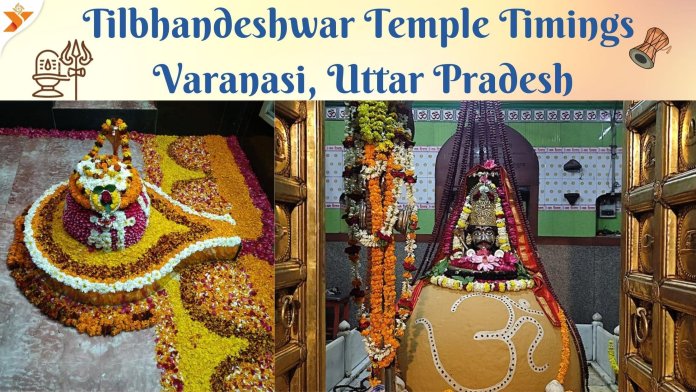 There is more than one Shivalay in Kashi, the glory of which is described in Shiva Purana and many other Puranas. Today every pagoda is crowded with people and one such Shiv temple is of Tilbhandeshwar Mahadev.

He is mahadev of Varanasi as it is really depicted from the name itself that it related to sesame and mole.  Because Baba Bholenath grows here every day equal to a sesame seed.

The temple of Baba Tilbhandeshwar Mahadev is located in Kedarkhand and Kashi is considered to be situated in two sections i.e Kashi Khand and the other Kedarkhand. Kashi Khand belong to Baba Vishwanath and Mahamrityunjay. While, Kedarkhand includes Tilbhandeshwar, Kedareshwar and many other important Shivalay. The Shivalay is resonating with the chants of Har Har Mahadev on the day of Mahashivratri

Devotees worships Baba for the fulfilment wishes by performing Jalabhishek and Rudrabhishek.  Experts say that offering sesame seeds to Baba Tilbhandeshwar brings happiness and prosperity as sesame is dedicated to Lakshmi and it is also very dear to Baba Mahadev.

History Behind the Tilbhandeshwar Temple of Varanasi

This ancient temple of Tilbhandeshwar Mahadev situated in the Bhelupur area of ​​Varanasi is self-styled.  The Shivling present here was originated by itself and it is present in this condition since the time memorial.  According to the experts, when Baba Bholenath started growing like a mole, then his size gradually became very huge, due to which the gods and saints were frightened and prayed to Baba Bholenath that if you keep growing like a mole in this way, then the earth will fall.  After which Lord Bholenath accepted the request of all of them and blessed that Bholenath will now grow like a mole on the festival of Makar Sankranti, not every day but for one day in a year.

Apart from this, another story is prevalent, in which it has been told that after being frightened by the ever-increasing form of Baba, Lord Bholenath accepted prayers and asked to increase 15 days of the month and decrease only 15 days. The sages asked to rub the Shivling with the hair of the coconut to keep this majestic form of Baba stable, the practice of which continues even today.  By pulling the form of Baba Bholenath from the hair of the coconut, the huge Shivling is prevented from growing.

It has also been said in the Shiva Purana, “Kashyam Marnyam Mukti” i.e. salvation is attained on death in Kashi, in such a way how important this divine form of Shiva is for the devotees, it is difficult to describe in words.

The Tilbhandeshwar Temple is 4.4 km away from the bus stand of Varanasi. Government buses are available from any state and private buses and vehicles are also available to reach Varanasi.

Babatpur is 26 km from Varanasi.

Lots of stay options are available in the religious town Varanasi near the temple. For more details click the below button.

Places to visit in Varanasi

For more updates connect with us at YatraDham.Org