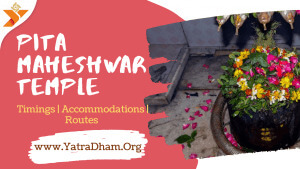 Pita Maheshwar Shivling is located 40 feet underground and it is considered to be very powerful thus visitors can take darshans by peeping through the hole made in the ground. They are located in the narrow streets and residents in Kashi.

The “shivling” in Pita Maheshwar Temple is believed to be a self-manifested form of Shivling. The mention of this Shivling can also be found in Skand Puran. Pita Maheshwar temple is one of such temples that is saved by our ancestors and it is said that he who worships Pita Maheshwar gives Mukti to his next 20 generations.

How to reach Pita Maheshwar Temple

Temple is reachable from the chowk and one can take an auto-rickshaw or cycle rickshaw to reach there.

Varanasi Airport is connected to major cities like Delhi and Mumbai.

Varanasi bus stand is also connected to the major cities of Uttar Pradesh and other nearby states. Air-conditioned buses run through the nearby cities of Varanasi.

Also by road, Varanasi is connected to Alipur, Allahabad, and Kanpur from where you can take a cab or taxi.

There are several Dharamshalas in Varanasi near Pita Maheshwar temple for accommodation and are also near temples in Varanasi. They provide hygienic rooms with great facilities. Also, you can book a stay online with a few clicks on your phone from below.

Book your Stay in Varanasi

The temple opens up only on a few selective days such as Shivratri, Rang Bhari Ekadashi, and Mondays of monsoon season but one can see the Shivling from the hole throughout the year.

The important festival celebrated in Pita Maheshwar Temple is Mahashivratri.