The Complete Story of Lord Narasimha 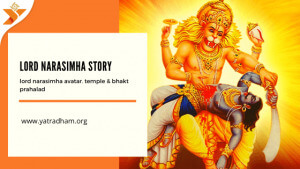 Narasimha Jayanti, the 14th day of Baisakh Shukla Paksha. On this day, Lord appeared in the form of a half lion – half man. To rid the world of a demon named Hiranyakashipu who had terrorized the world for a long. This is the fourth of the ten Avatars.

Hiranyakashipu and Hiranyaksha were two brothers born to Rishi Kashyap and Aditi. Both were of demonic nature and did untold harm to the world. Lord Vishnu, in the form of a boar (Varaha), had killed Hiranyaksha earlier.

Now Hiranyakashipu wanted revenge. He performed severe penance for thousands of years and lord Brahma granted him a boon.

The boon ensured that Hiranyakashipu could not be killed by a man or beast, during the day or at night. Not inside a house or outside, not in the sky or on earth and not by any weapon.

Such a boon made Hiranyakashipu invincible. He captured heaven and earth and drove out Lokpals (maintainers of law). And wreaked havoc everywhere. No one was safe and no one could defeat him!

Good always wins over the bad

Bhakta Prahlad was born. He was Hiranyakashipu’s son and a great devotee of Lord Vishnu. In spite of repeated attempts by Hiranyakashipu, he was not able to stop his path of Bhakti. Hiranyakashipu even tried to kill him many times but did not succeed. As the Lord protects his devotees.

Another of our great festivals – Holi is connected to this story

Hiranyakashipu sent his sister Holika to burn Prahlad alive. She went and tried to do as her brother had ordered, but ended up getting burnt herself!

Thereafter started the festival of Holi, preceded by ‘Holika Dahan’. Which means the burning of Holika the demoness.

Badri  Vishal and Joshimath are also a part of this story

Seeing the situation, the Lord incarnated in a form of Varaha. That made it possible for Him to bypass all  Hiranyakashipu’s boons. The form was half-lion, half-man (Narasimha).

The place where the Lord took Avatar is in Multan, now in Pakistan. Prahladpuri is a specific area. After the killing of Hiranyakashipu, Prahlad built a grand temple. Dedicated to Lord Narasimha here. Rebuilt several times over the centuries, the temple in 1947 was now in Pakistan. A devotee brought the idol to India. And installed in the Narasimha temple in Haridwar (Uttarakhand). The original temple in Multan is now in ruins.

After the slaying of Hiranyakashipu, the Lord’s fury was uncontrollable. Mata Lakshmi and Prahlad requested him to go to Badrinath. The Lord came and lay in the icy waters of the Alaknanda river and cooled Himself.  The spot named Narasimha Shila is still there between the river. And is a highly sacred site.

Joshimath is home to an ancient Narasimha Mandir. That is the 105th of the 108 ‘Divyadesh’ Vaishnava temples. Adi Shankaracharya established the temple here. He was a great devotee of Lord Vishnu. He spent five years in Joshimath. Even today, they chant the shlokas written by Adi Shankaracharya to perform puja here.