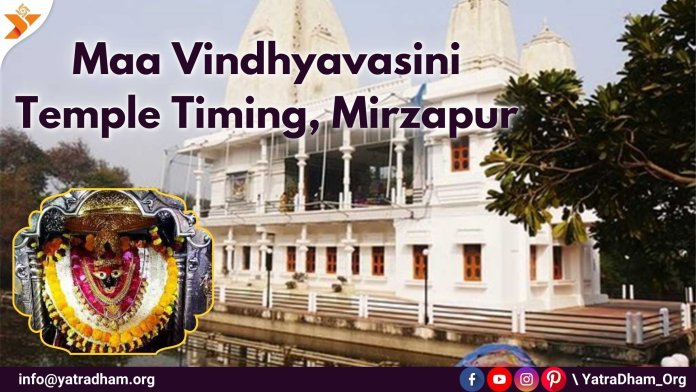 The Pandits of Mata Vindhyavasini Temple say that the wishes of all the devotees who come here for Darshan are always fulfilled.

Vindhyavasini temple is also called as JagrutPeeth. In the temple of Vindhyavasini, people from different parts of the country come here to visit. Most people come here during Navaratri as it is the major festival of the temple.

Different parts of the Goddess are worshiped in the form of symbols in Shaktipeeths. Here in Vindhyavasini Temple, Adi Shakti Mata Vindhyavasini is seated with her whole body. Whereas in other Shaktipeeths only part of Sati’s body has fallen and so that particular part of the body is worshipped.

Mata Sati is the daughter of King Daksha. Although King Daksha had fifteen daughters, he was dissatisfied, because he wanted a daughter who would be the primordial deity of all powers as well as endowed with all virtues, so he did penance to please “Bhagwati Adya Devi”. And a few days later, when the first goddess was pleased, the prudent king asked her for a boon of having another daughter like “Bhagwati Adya Devi”.

After some years Mata Sati grew up and married Lord Shiva. But Mata Sati’s father Daksha was not happy with this marriage with Lord Shiva. Daksha performed a Yagya in which all the Gods were invited except his daughter Sati and Lord Shiva.

Sati went to the Yagya without being called. In the Yagya, King Daksha said derogatory things about Lord Shiva. Sati could not bear it and physically dedicated herself to the altar of the sacrifice. Lord Shiva, immersed in sorrow, raised the burning body of Sati and performed tandav.  To stop this, Lord Vishnu used Sudarshan Chakra to cut Sati’s body into pieces.

After that, the places where the body parts of Mata Sati fell are called ShaktiPeeths.

How to go to Vindhyavasini Temple

The nearest railway station to Vindhyavasini Mata Temple is Vindhyachal. The temple is one kilometer from here.

You can go by National Highway 2 i.e. NH 2.  Apart from this, Uttar Pradesh state transport buses also run from Allahabad and Varanasi.

The nearest airport is at Babpur in Varanasi.  This international airport is known as Lal Bahadur Shastri.  The distance from here to Mata Vindhyavasini Temple is about 72 kilometers.

Book your best stay in Vindhyachal today and visit the holy shrine!