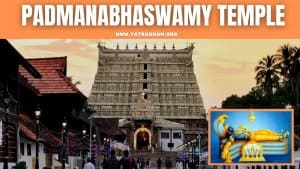 The fabled Padmanabhaswamy Temple in Thiruvananthapuram is dedicated to Shri Narayana, in His ‘Ananta Shayana’ form. Here, Shri Narayana is seen reclining on Adishesha (Sheshnag). Thiruvananthapuram, when translated means ‘City of Anantha’. Sheshnag (Anantha) is the Divine serpent who bears the weight of the universe. Padmanabhaswamy Temple is one of the 108 Divya Desams of Lord Vishnu. Within its numerous vaults lies a fabulous and staggering treasure trove, said to be guarded by Sheshnag. This is one of the World’s Richest Temple.

Sree Padmanabhaswamy Temple has been a pilgrimage since times unknown. It is believed that Lord Parshurama enshrined the first Murti in the Dwapar Yuga. He laid out the procedure and rituals to be followed and appointed the first set of Pujaris to administer the temple. King Aditya Vikram of Venad was asked to protect the Kshetram. With the passing of time, this pilgrimage faded away from memory but was to be revived by Divine intervention.

Mention of this temple can be found in various religious texts such as the Vishnu, Brahma, Matsya, and Bhagavad Puranas. It is also written about in the Mahabharata and Tamil Sangam literature (300 BCE to 500 CE). The place from where Vilvam Mangalathu Swamiyar had come – Ananthapuram in Kasargod district is considered the “Moolasthanam’ of Padmanabhaswamy temple.

The Padmanabhaswamy temple is managed by a trust of the Travancore Royal Family. This has been in practice since Marthanda Varma became the ruler in 1731. He renovated the temple extensively and replaced the wooden Murti with the one seen today. It is made of a complex mixture called Katu Sarkara Yogam and contains 12008  Shaligrams brought from the Gandaki River in Nepal. Marthanda Varma surrendered his kingdom to Shri Padmanabhaswamy and declared himself to be a servant of the Lord (Dasa). Since then every Travancore ruler’s name has been preceded by the title “Padmanabha Dasa’. All the wealth they acquired over the centuries was given to the temple.

Main Temple, other Shrines, and Festivals

In the Sanctum of the temple, Shri Narayana is seen reclining on Sheshnag. Bhudevi and Sridevi are by His sides. Lord Brahma on a lotus emerges from His Navel. The platform on which the Murtis are placed is 20 feet square and was cut from a single rock. Also within the temple are shrines dedicated to Krishna Swami and Ugra Narasimha. Outside the complex are more shrines dedicated to Lord Ganesh, Shri Rama, Lakshmana, Sita Mata, and Hanuman Ji. The breathtaking Gopuram is 100 feet tall. Other deities seen are Garuda, Vyas Ji and Shasta.

Sri Padmanabhaswamy Temple celebrates a number of festivals during the year. Panguni, Aipashi and Navratri are the main ones.  One unique and the biggest festival is the Laksha Deepam festival. This event happens only once every six years. Prayers are offered, mantras chanted and the Vedas recited for 56 days before the festival. On the last day, 100,000 lamps are lit in the temple premises.

The Fabulous Treasure of Padmanabhaswamy Temple

The Padmanabhaswamy Temple has in its numerous vaults a fabulous treasure that was largely unknown till recent times. A conservative estimate of the hoard is over one trillion US dollars. The vaults which are about 8 or nine in number are stacked with gold coins, precious stones, gold thrones, ceremonial dresses, jewelry, gold chains, pots, and much more. All this has been accumulated over thousands of years. Some of the gold coins date back to 200 BCE. There is one vault that has not been opened yet as it is forbidden. It is estimated that this vault contains the bulk of the treasure and if opened and assessed, the value of the treasure could be several trillion US Dollars. Many years ago some Britishers tried to open the door of the forbidden vault. They opened the first door and entered the ante-room which was filled with cobras. They fled for their lives and since then no one has attempted to open this vault.

(Timings may change on festivals and special occasions)

There are strict dress codes and rules for Padmanabh Mandir which have to be followed to enter the temple.

Men need to wear mundu or dhoti (worn around the waist and going down up to the heels) and should not wear shirts of any kind.

Women need to wear a sari, Mundum neriyathum (set-mundu), a skirt and blouse, or half a sari.

Dhotis are available for rent at the temple entrance. Nowadays temple authorities allow the wearing of dhotis over pants or churidhar to avoid inconvenience to the devotees.

Only Hindus are permitted inside the temple.

How to reach Thiruvananthapuram

Thiruvananthapuram Central Railway station is about 1.2 km from the temple.

Thiruvananthapuram Airport is 4.5 km from the temple.

Where to stay in Thiruvananthapuram

There are a number of hotels and guest houses in Thiruvananthapuram to choose from.

There are also dharamshalas and trusts where rooms can be booked. Click on the link below to know more and book rooms –