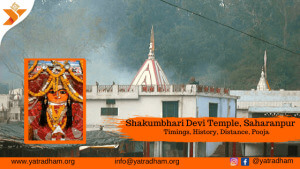 The main statue in the sanctum sanctorum of the temple is that of Mata Shakumbhari Devi. On the right-hand side of the mother lies Mother Bhima Devi and Bhramari Devi. On the left is mother Shatakshi Devi.

Mother’s blessings are obtained by coming here during every auspicious work of the family. People come here to seek blessings with money and other offerings.

An ancient legend is mentioned in this regard. At one time there was an Asura named Durgam. He pleased Brahmadev by extreme penance and obtained the boon of conquering the gods. After getting the boon, he started harassing humans.

As he had a boon to win over gods he also did that. The four Vedas were also inaccessible by snatch from Indra Dev. When the Vedas were not there, the four varnas became meaningless. There was a severe drought on the whole earth due to which all the vegetation dried up.

In such circumstances, both God and humans started praising mother Ambe. Seeing this situation of the gods and humans, streams of tears of compassion burst out of the mother’s hundred eyes.

With the blessing of the goddess, all the habitation and vegetation grew as it was before. As mother had showered compassion with her hundred eyes, that is why she was called Shatakshi.

Similarly, due to the production of various herb foods, the devotees worshiped the mother in the name of Shakumbhari.

Then the Goddess took the Avtar of Mahakali and killed the asura. It is said that Bhuradev and his companions created panic among the demons and in Bhuradev was killed.

Goddess went alive again. And said that anyone who comes here for having my blessing, have to first visit you. And then only the yatra will be completed.

How to Reach Shakumbhari Devi Temple

25 km from Saharanpur city and about 50 km from Yamunanagar in Haryana province. This holy abode is established far away. The temple of the Goddess is beautifully decorated in the middle of the rainy river flowing from the middle of Shivalik hills.

One can get the different modes of transportation from Yamunanagar and Saharanpur city.