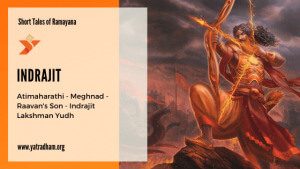 Contents show
Indrajit or Meghnath
Why was only Lakshman able to kill the Indrajit?
Some Interesting facts about the Indrajit

Indrajit (Conqueror of Indra)or Meghanada a powerful warrior in Ramayan. He was the son of Raavana and one of the greatest warriors in the Hindu Text.

Indrajit played and crucial role in the great war between Lord Rama and Raavana. He is considered an Atimaharathi. Atimaharathi means someone who can fight 12 Marathi simultaneously and defeat them. He was the only warrior which has the three ultimate weapons of Trimurti. Those are Brahmandastra, Vaishnavastra, and Pashupatastra.

He defeated devas in Heaven.

During the war between Lord Rama and Raavana, Indrajit defeated Rama and Lakshman. And in the Second encounter with Lakshman Indrajit disabled Lakshman. Using Brahmandastra, he killed 67 million Vanaras in a single day. Approximately half of the Vanaras of the Sena.

Why was only Lakshman able to kill the Indrajit?

Indrajit had a boon that he can only be killed by a person who has not eaten, slept, and not seen the face of a woman for  14 years.

So Lakshman had all the above qualities so he was able to kill the Indrajit.

How Lakshman was able to kill Indrajit? Read here.

Some Interesting facts about the Indrajit

Don’t forget to be a part of the conversation. Comment below your suggestions/corrections. Let us know what you want to read next?

For more such type of information about the Ramayana and Mahabharata and much other religious information visit our Latest Blogs at Yatradham.Org/ Blogs.