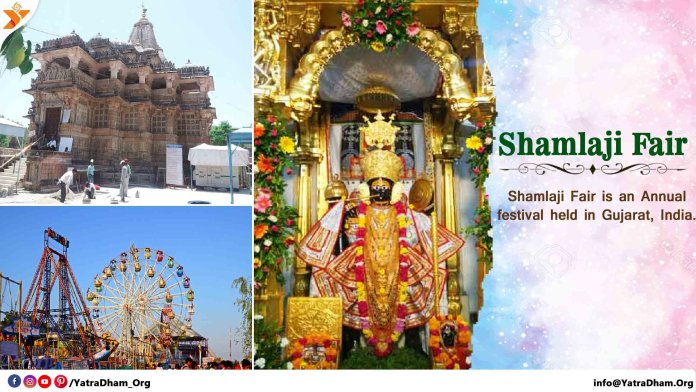 Shamlaji Fair is called the annual festival of Gujarat, India, and began on the day of Karthik Purnima. People from all over come and attend this fair, who have great faith in Shamalji (Baliya Bajwa).

Different regions of Gujarat and also of Rajasthan come to visit this fair. This fair is the clasp at the ancient shrine Shamalji at the bank of Meshwo river, in Sabarkantha district.

When did Shamlaji fair hold?

It is usually held from Devuthi Agiyaras till Purnima and that is the longest-running fair in India.

This fair is dedicated to Lord Vishnu and it is believed that there are three legends about constructing the shrine Shamlaji. One legend has revealed that once Brahma came to Shamlaji in search of the best pilgrimage on earth and stopped there, he started penance and Yajna (sacrifice). As a result, Lord Vishnu appeared in the form of Shamlaji and establishes himself there.

There are a large number of devotees who arrive to take the blessing of Shamlaji when this fair is held, they seem to come on their feet as well as on camel carts, singing devotional songs, dancing, and holding banners in their hands. They go to worship the deity and bathe in the sacred water of the Methow river.

Things to do at Shamlaji Fair

Here you can see the barter system which was followed in ancient times, during the festival the barter was for silver jewelry, clothes, household items, and many other things.

The location is at the border between Gujarat and Rajasthan and the fair is held around November and will always last for three weeks. You can check and visit our site yatradham.org for better rooms and facilities around and can easily enjoy the fair which is held every year.

Are you planning to visit here this year or not?

Let us know if you have any queries or something else related to this blog we would like to solve them for you all.

Gandhi Jayanti 2022 - Journey to the places that depicts his life