Shravan month is all set to begin this year and lord shiva devotees have started the preparation for this holy month. On every Monday of “Shravan Mahina,” lord shiva devotees do fasting. Lord Mahadev is also known as “bholenath”, “Shankar” or “the destroyer” in Hinduism. Chant “Har Har Mahadev” and learn more about 8 famous shiva temples in Gujarat you must visit this Shravan Month. Below you can also find a list of Dharamshala near the Temple– that makes your experience divine during your religious trip. Somnath temple, Dakor temple, galteshwar Mahadev temple, nageshwar jyotirlinga, and jyotirlingas of Gujarat are some of the famous temples in Gujarat.

It is believed that devotees of Lord Shiva have a happy and blissful married life and his worshippers adore him for great boons. Lord Shiva is worshipped in many forms across India, hence there are several temples of Lord Shiva in India. The festival of Shravan is celebrated by devotees of Lord Shiva, this month is considered an auspicious and holy month for all. A number of Shiva temples in Gujarat celebrate this special occasion on a grand level. Explore the top 8 famous Shiva temples in Gujarat and the best stay available near. One of the holiest Shiva temples is Somnath Mahadev Temple. Located near the crashing waves of the Arabian Sea and Somnath Beach. The temple has an interesting fact that you must know- A magical stone hidden within the hollowness of the shivling has powers like producing gold, alchemy, and radioactive capacity that has the ability to create a magnetic field that enabled the Shivling to float above the ground. The incredible temple has suffered destruction over 15 times.

Check out the Best Dharamshala Near Somnath Jyotirlinga Temple Here is the list of Dharamshala stay options in Somnath with basic facilities on an affordable budget. For more information and details check below. Five thousand years ago, a Shivalinga was revealed in the Arabian Sea, known as Shri Bhadkeshwar Mahadev Temple in Dwarka. During the month of June/July, the ocean performs abhishekam the Shivling and sometimes the temple becomes part of the ocean. The temple is located on a hillock on the Arabian Sea in the west of Dwarka.

During Maha Shivratri, a grand fair is organized around the temple, which is a must-visit on your trip to Devbhoomi Dwarka.

Check out the best places to stay in Dwarka The rooms are clean and well maintained.

Between Gomti and Dwarka lies Nageshwar Jyotirlinga, Nageshwar means “Lord of Serpents”. Around the neck of Lord Shiva resides “Vasuki” – a snake. It is believed that the one who worships Nageshwar has a poison-free mind and soul.

It is believed that Shri Krishna used to worship Lord Shiva here and had also performed rudrabhishekam here. 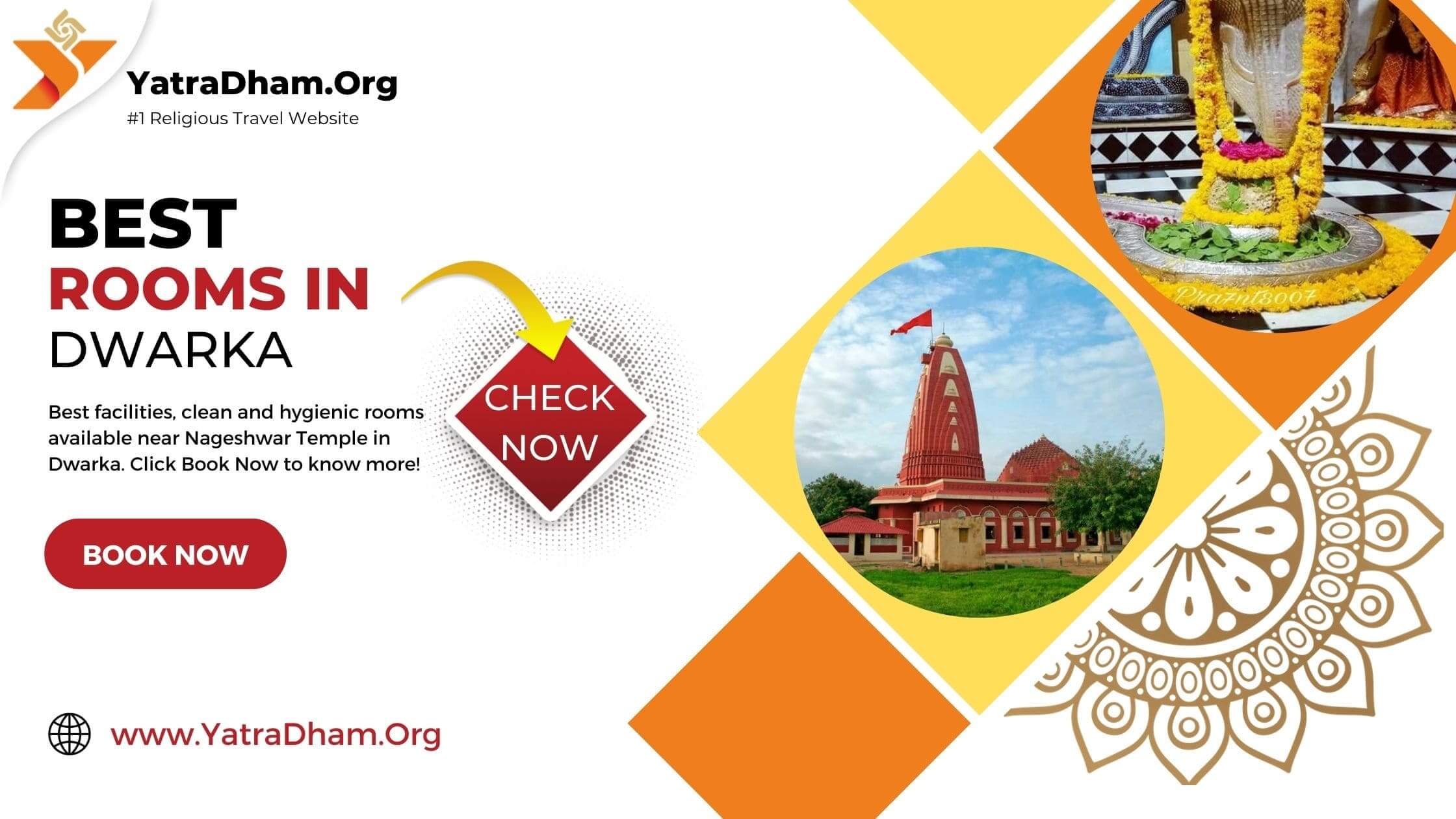 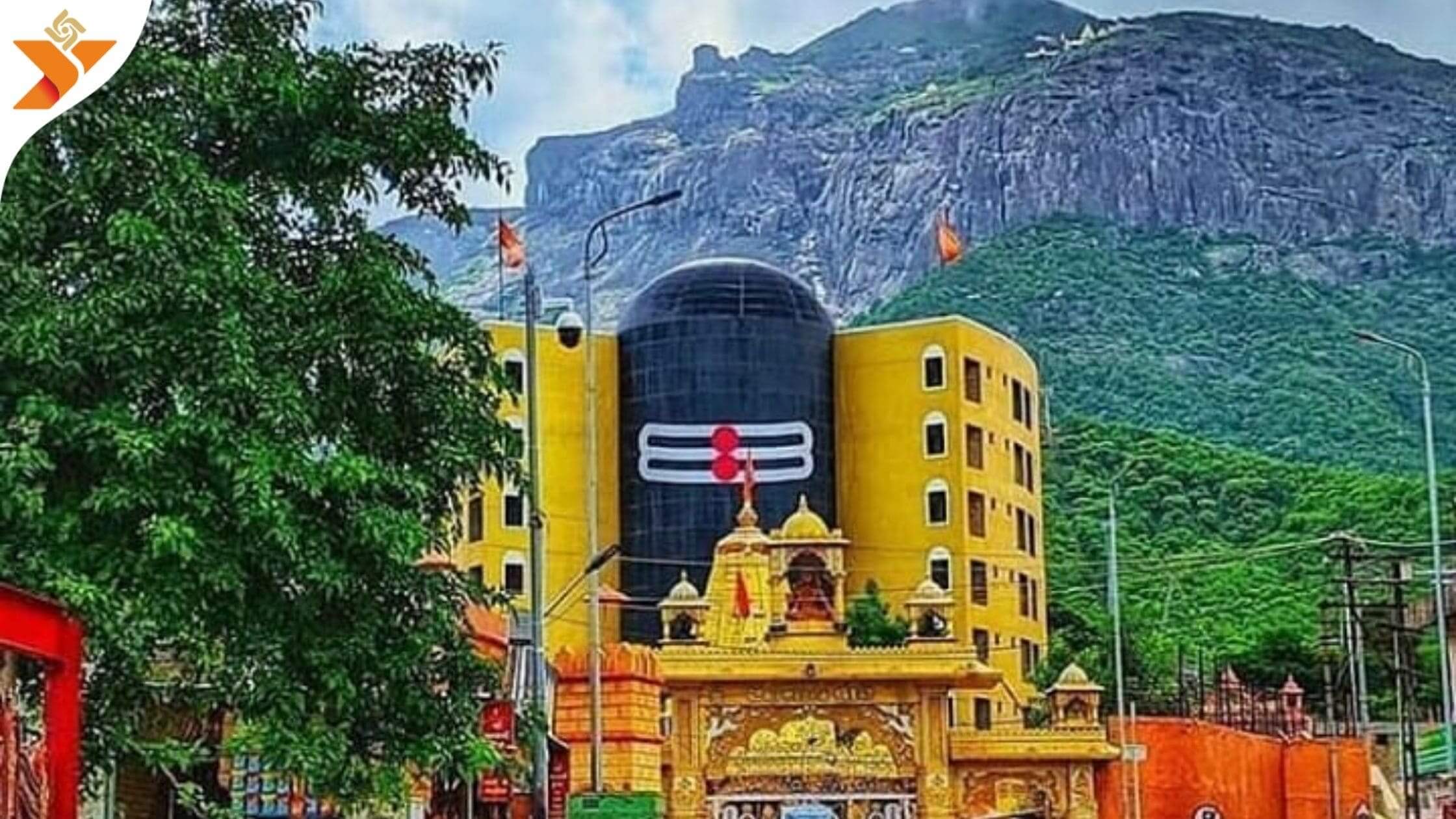 Once Lord Shiva and Parvati were crossing the hills of Girnar, during that time their divine garment fell over the present Mrigi Kund. The ancient Hindu temple is located in the Bhavnath village near Junagadh. 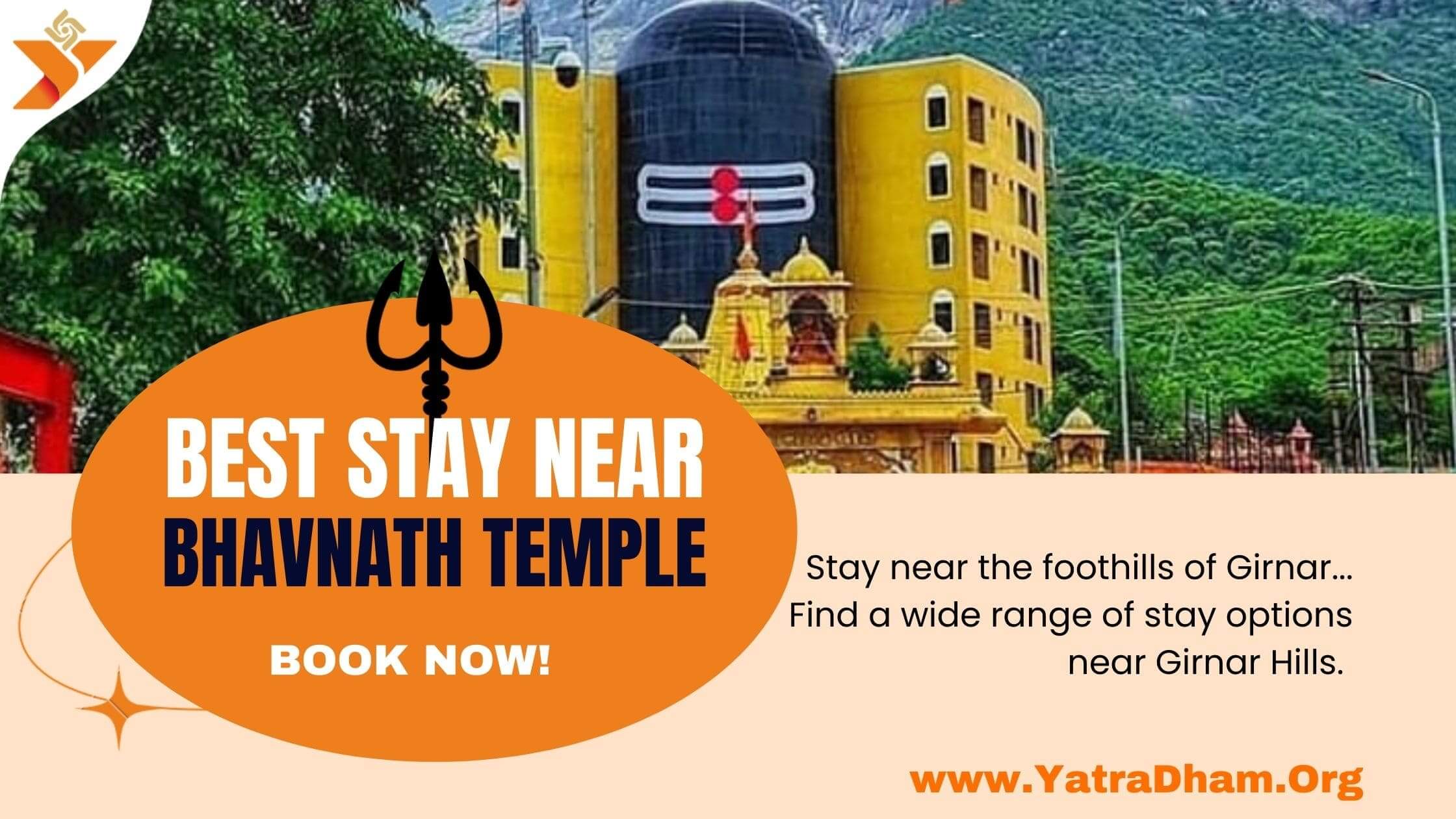 Ravana was gifted with a boon of a Shiva Linga of great spiritual power from Lord Shiva, for an outstanding display of piety. But Ravana, in his arrogant haste, accidentally dropped and fell to earth at Koteshwar. After which, the Koteshwar temple is built.

During their visit to the temple, visitors also walk along the beach nearby. 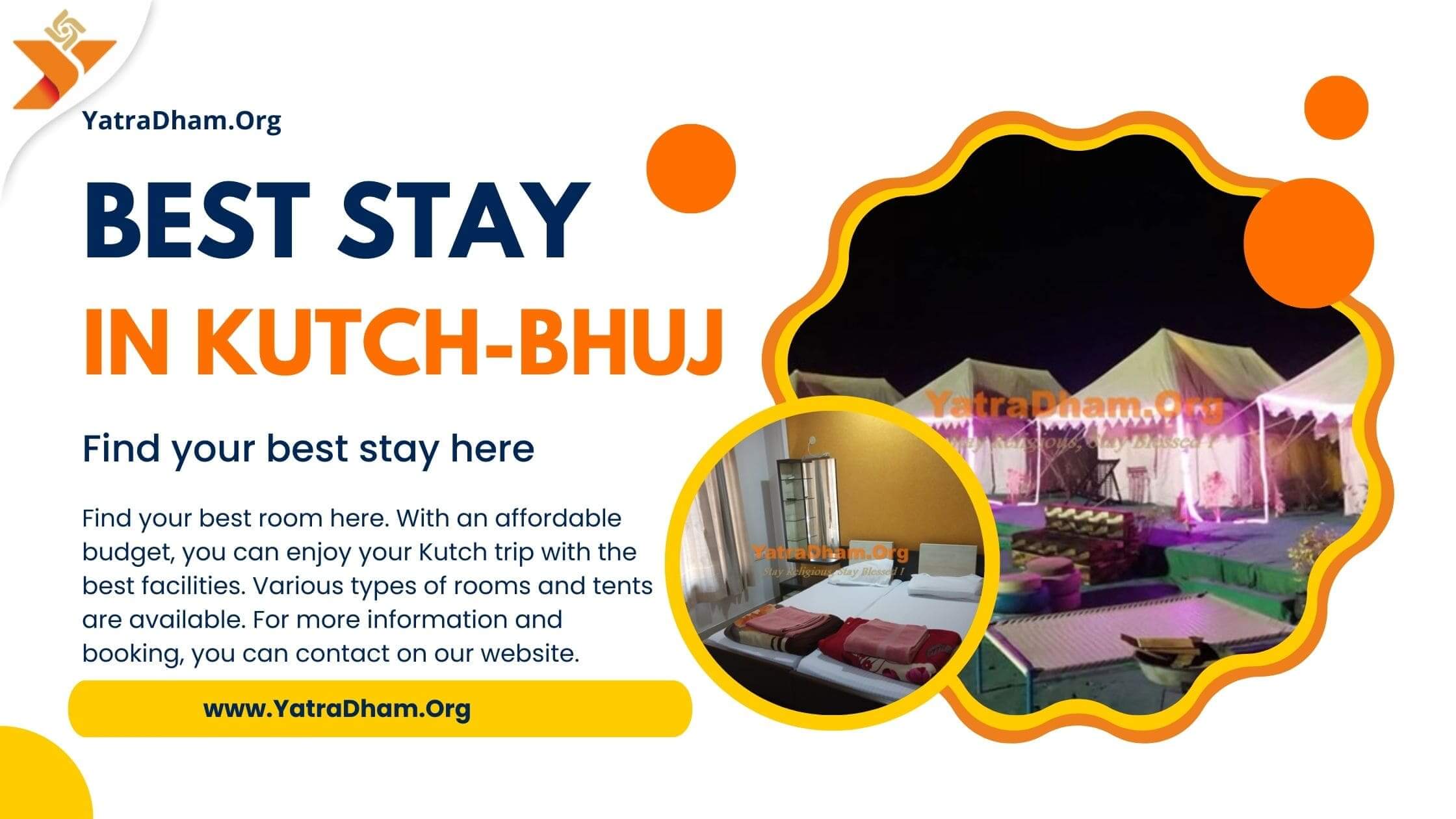 Best Places to Stay in Kutch-Bhuj

Koteshwar Mahadev Temple is located 152 km away from Bhuj. Here is a list of the best accommodations in Bhuj where you can have your best night’s stay.

Hotels and Tent Stay in Kutch-Bhuj 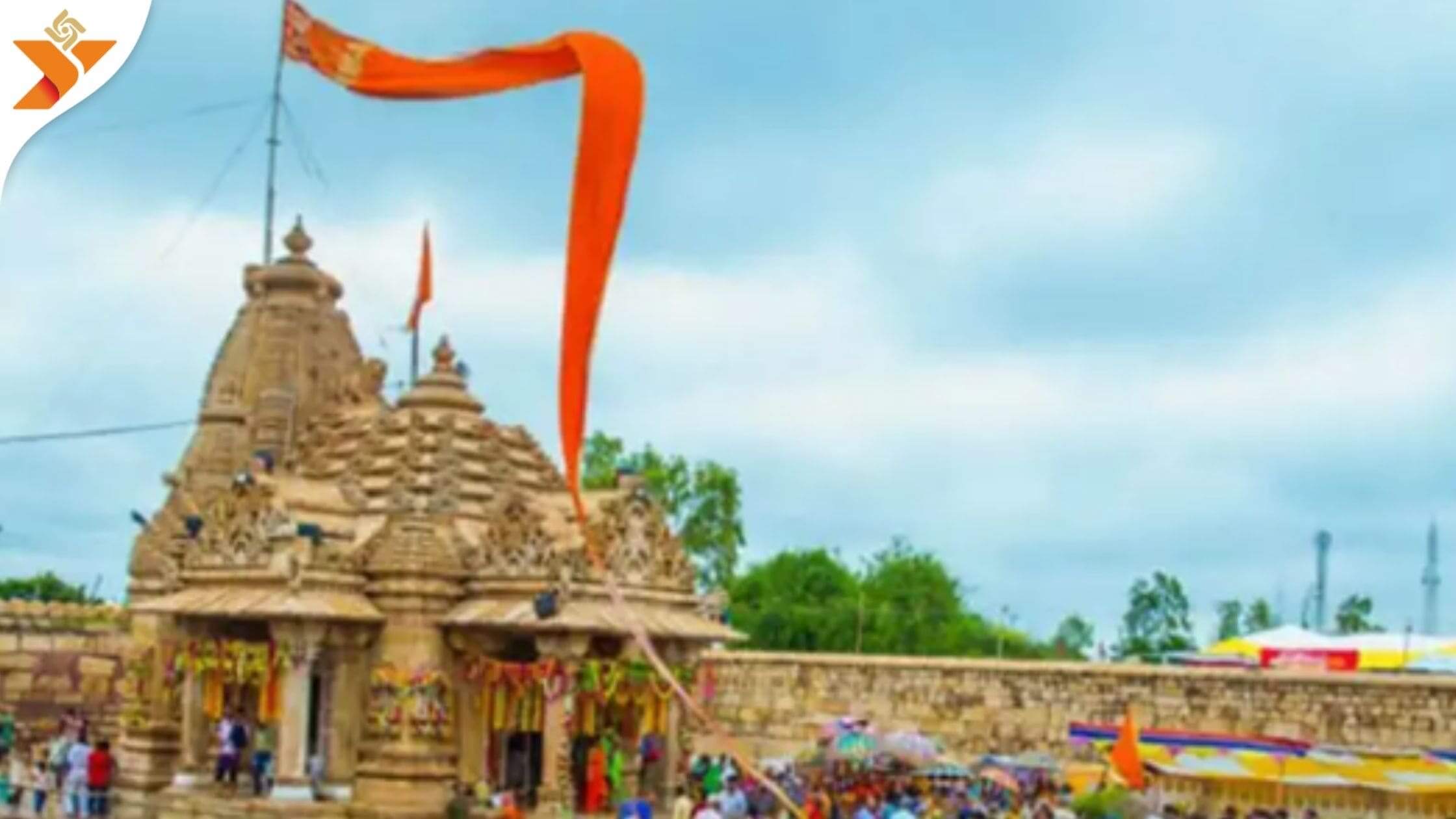 Trinetreshwar Temple is famous for its “fair of color”. Every year on Bhadarva Sud Pancham the Tarnetar fair is organized. There are 2 Shivlings in the temple of Tarnetar.

On the day of “Tarnetar No Melo”, a flag of 52 yards is hoisted on the temple of Trintreshwar Mahadev temple.

Get to know more about Tarnetar Fair and Trinetreshwar Temple Nishkalank Mahadev Temple- also known as the “temple inside the sea”. The temple is established by the Pandavas after the Kurukshetra War. This temple has 5 distinct swayambhu Shiva Lingams. The idol submerges during the high tides.

All About Nishkalank Mahadev Temple

Visiting the temple on Amavasya (new moon day) is considered auspicious. Every year the famous fair “Bhadarvi” is held on the new moon night of Shravan. Before visiting the temple it is necessary to take note of high tides and low tides. 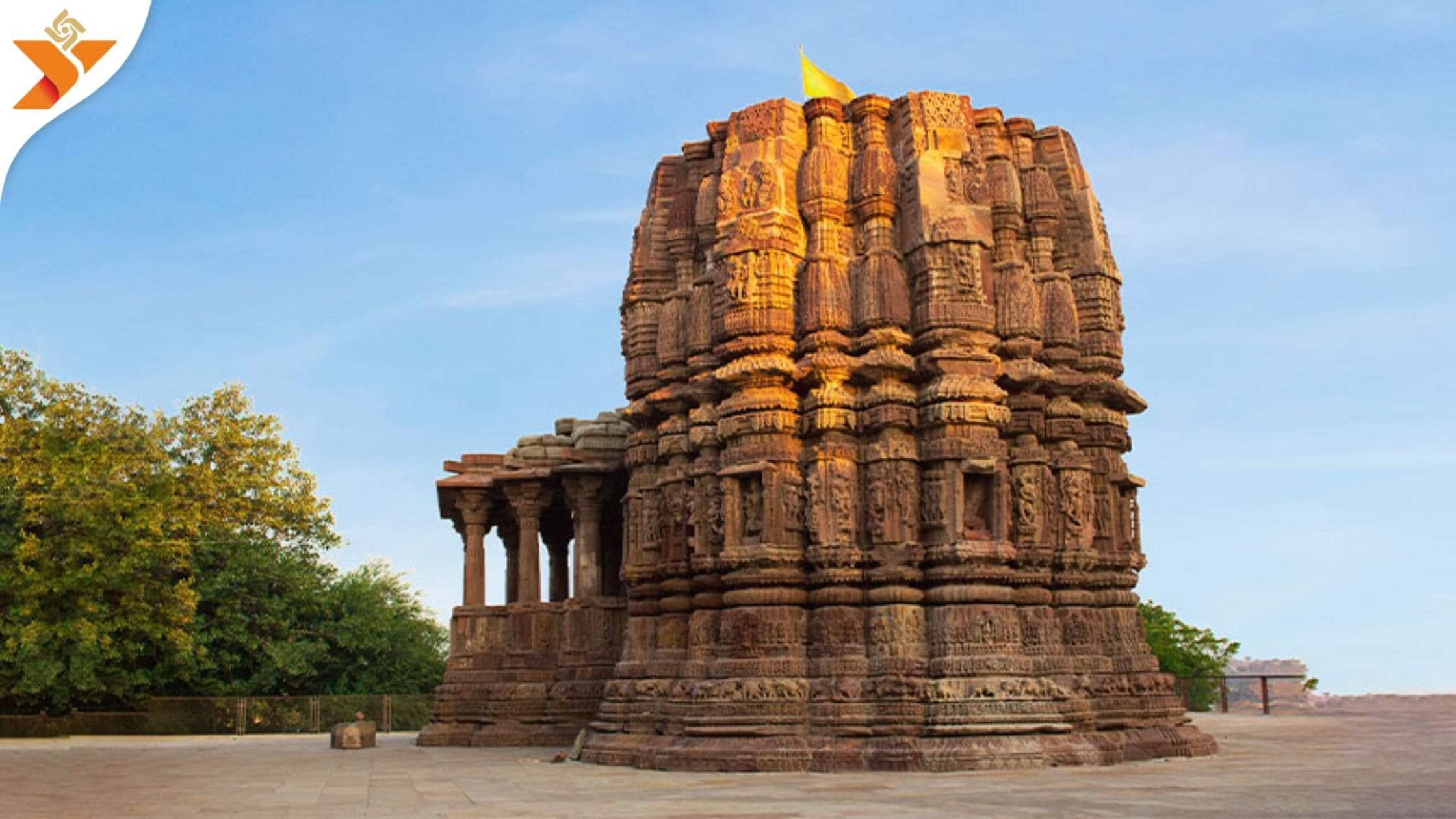 Galteshwar Mahadev Temple is located at the confluence of the Galta and Mahi rivers near Sarnal village in the Kheda district. And hence the temple received its name from the Galta river.

The temple is rich in art and architecture. One must visit the temple to explore the walls that have carved figures of god, Gandharvas, humans, rishis, horse riders, elephant riders, chariots, doli (palanquins), and the events of human life, from birth to death.

Check out the best accommodations in Dakor

Which temple are you visiting this Shravan Month? Let us know in the comments below.