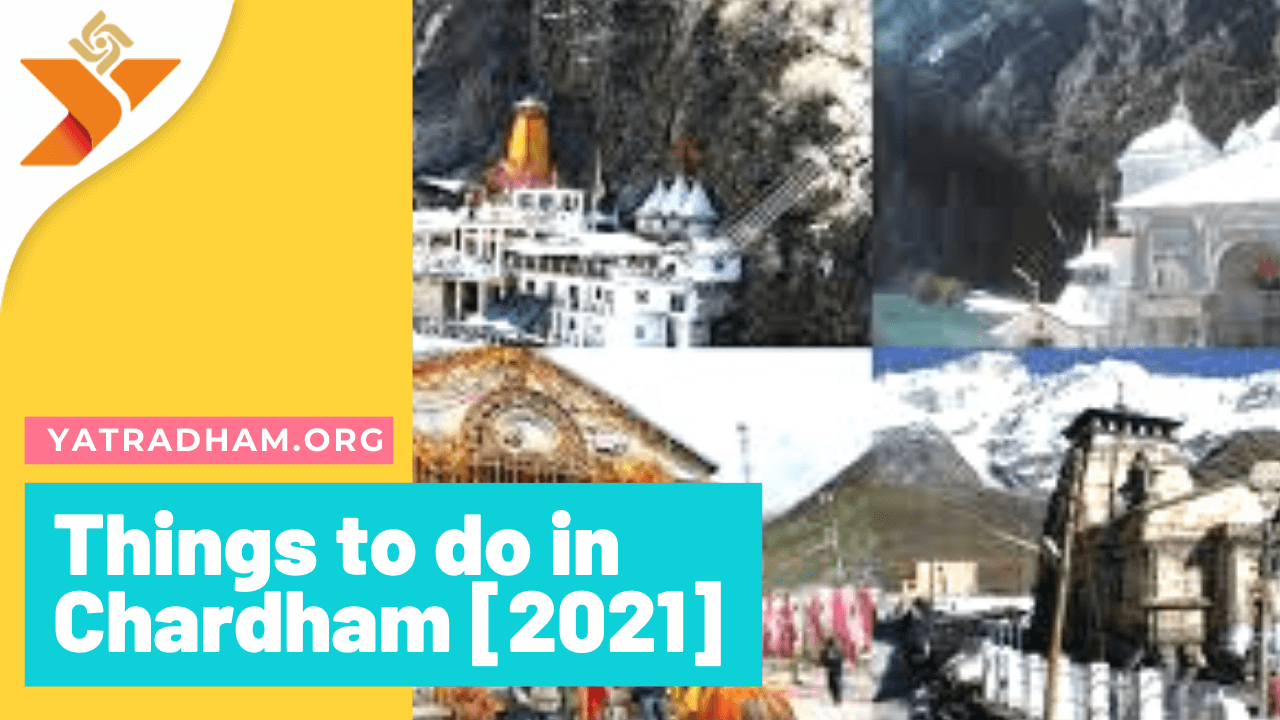 The Char Dham Yatra of Uttarakhand is one of the most looked forward to and exciting journeys. Those who are about to start the journey in the near future find it hard to contain their excitement. Those who have no plans as yet think – when will they be lucky enough to go! A little planning and some knowledge of the Yatra beforehand is most useful when on the actual trip. Many yatris miss out on something or the other because they did not know about it or came to know too late. Explore Things to do in Chardham [2021]

Things to do in Chardham [2021] usually begins from Haridwar or Rishikesh. The first place to be visited on the 4 Dham yatra is Yamunotri, followed by Gangotri, then to Kedarnath and finally ending the journey in Badrinath. In these four abodes of God there are a number of places that are to be visited. There are also many places in between or nearby that are worth visiting. Let us take a look at those places.

Enroute and in Yamunotri

The journey from Rishikesh to Yamunotri takes us through Dehradun, Mussoorie, Lakhamandal, and Barkot to Janki Chatti. From Janki Chatti, Yamunotri is a 5 km trek. Some places to keep in mind –

Robber’s Cave – also known as Guchhupani, it is about 10 km from Dehradun. The cave is nearly 600 meters long with a spring flowing through and waterfalls at some spots. It is believed robbers used to hide here in the days gone by.

Sahastradhara – This is a waterfall and spring further on and about 20 km from Dehradun. It is a peaceful and beautiful place to relax a while. The water here is known to have medicinal value.

Kempty Falls – is a beautiful waterfall about 14 km on from Mussoorie and a very popular destination for tourists. Boating facilities are available in the nearby Mussoorie lake.

Lakhamandal – is 25 km before Barkot and 75 km from Dehradun. There is an ancient Shiva Temple here. It is also believed the Pandavas took shelter in a nearby cave when their Lakshagraha (House of Lac) was burned by Duryodhana.

Hanuman Chatti – is 36 km from Barkot and 9 km before Janki Chatti. There is a small Hanuman Mandir here. Hanuman Chatti is a base for many mountaineering expeditions.

Janki Chatti – This is where the motorable road ends and the 5 km trek to Yamunotri starts. There is a hot water spring here where you can get rid of tiredness and fatigue by bathing in the kund.

Yamunotri Temple – This is the main temple here where puja and prasad is offered to Mata Yamunotri. A silver Murti of the Goddess is enshrined in the sanctum.

Surya Kund –  This is a natural hot water spring near the temple. Devotees bathe here before darshan. They also cook rice and potatoes in the boiling hot water which is offered in the temple and taken home as Prasad.

Divya Shila – This is a natural rock pillar near the temple. According to tradition, devotees first pray here before entering the temple.

Champasar Glacier – This is the actual origin of the Yamuna river and is located about 3 km further up from the temple. It is a steep and difficult trek, so not many are able to go.

From Yamunotri, the route to Gangotri goes via Barkot and Uttarkashi

Enroute to and in Uttarkashi

Prakteshwar Mahadev – This is a natural cave about 70 km from Barkot. It has a limestone formation resembling a Shivling. It is visited by many devotees on their way to Gangotri and can be reached by climbing about a hundred steps.

Vishwanath temple – This ancient temple in Uttarkashi has a Swayambhu Shivling enshrined in the sanctum. It also has Murtis of Parvati Mata, Ganeshji and Rishi Markandeya. Legend says Lord Shiva appeared here to save Rishi Markandeya from Yama.

Shakti Temple Uttarkashi – Opposite the Vishwanath temple, Shakti temple is dedicated to Goddess Durga. Devotees come for blessings and to see the heavy trident of Maa Durga which was used to kill demons.

Gangnani – 47 km from Uttarkashi lies this beautiful village with a hot water spring known as Rishikund Teerth. Most of the people heading to Gangotri stop here to bathe in the hot spring.

Harsil – 77 km from Uttarkashi, this gem of a hill station abounding with the charm of unspoilt nature is a favoured stop for travellers on the way to Gangotri. A seven km trek from here takes you to Sattal, a cluster of 7 lakes amidst alpine beauty.

Dharali – 2 km from Harsil is this yet another picturesque village known for its apple orchards and panoramic views of the Himalayas. An ancient Shiva temple here is visited by many pilgrims on the way to Gangotri.

Mukhba village – The temple in this pretty little village is home to Maa Ganga during the winter months, when the Gangotri temple is closed. Pine trees, wooden huts, rhododendrons and countless other flowering plants can be seen all around, as if out of a fairy tale.

Bhairon Ghati – 10 km before Gangotri, this valley is located on the confluence of the Bhagirathi and Jat Ganga rivers. An ancient Bhairon temple here is visited by many pilgrims on the Chardham yatra.

Surya Kund –  is a sacred Kund dedicated to Surya Dev. Devotees unfailingly come here to pay their respects to the Sun God. It is near the Gangotri temple.

Bhagirath Shila – This is said to be the place where King Bhagirath prayed to Maa Ganga for the salvation of his ancestors. This too, is not far from the temple.

Pandava Gufa – This is about 1 km from the temple. The Pandavas are believed to have stayed and prayed here in this cave while on their way to heaven.

Bhojbasa –  This is an idyllic village about 14 from Gangotri on the way to Tapovan and Gaumukh Glacier. At an altitude of almost 12400 feet above sea level, this place can be reached by a trek only as there is no motorable road.

Gaumukh Glacier –  The actual source of the Ganga River, this place can also be reached by an 18 km trek. The glacier lies on the slopes of the Chaukhamba range and is about 30 km long. It is a place of celestial beauty.

Submerged (Jalmagna) Shivling – This is a Shivling in Gangotri that remains submerged in the Bhagirathi river and is visible only in winters. This is believed to be the place where Lord Shiva received Maa Ganga in His Jata.

The route from Gangotri to Kedarnath goes via Uttarkashi, Guptkashi and Sonprayag.

Agastya Muni –  About 172 km from Uttarkashi, this is where the great sage Agastya Muni meditated and established his Gurukul. The Agasteshwar temple here is dedicated to him and is visited by many pilgrims.

Guptkashi – This is about 25 km from Agustyamuni and 30 km before Sonprayag. This is where Lord Shiva was hiding from the Pandavas. Of note here is the VishwanathTemple, where the original Shivling of Kashi Vishwanath temple was brought when the temple was attacked by Mughal emperor Aurangzeb. One can also visit the Ardhnarishwar temple and Manikarnika Kund here.

Sonprayag – A small picturesque town situated at the confluence of the Vasuki and Mandakini rivers. Sonprayag is known for the Triyuginarayan temple dedicated to Lord Vishnu, which is nearby. It is believed Lord Shiva married Parvati Mata here, in the presence of Lord Vishnu.

Chopta – Is a beautiful region of evergreen forests and rolling meadows. This place is about 24 km from Ukhimath and is a part of the Kedarnath wildlife sanctuary. This is one of the most idyllic and peaceful areas in the Garhwal region.

Gaurikund – This is where the motorable road ends and the 18 km trek to Kedarnath begins. Pilgrims bathe in the hot water spring and pray to Gauri Maa before proceeding to Kedarnath. Ponies and palanquin services are available here for the climb to Kedarnath.

Bhairav Temple –  A short distance from the Kedarnath temple. This temple is dedicated to Lord Bhairavnath, who is the guardian deity of Kedarnath town during the winter months when the town is covered with snow.

Vasuki Tal –  A sacred lake where Lord Vishnu is believed to have bathed, in the days of yore. The lake is 8 km from Kedarnath and can be reached by a challenging trek.

Rudra Meditation Cave – This is a facility run by the Garhwal Mandal Vikas Nigam and offers caves to stay and meditate. The cave-room has all the modern comforts of a good hotel.

Shankaracharya Samadhi – This is the structure built on the spot where Adi Shankaracharya is believed to have achieved the ultimate eternal position.

Joshimath – This is a town of great significance, about 45 km before Badrinath. The Murti and Puja of Badrinath Temple is moved to the Narsinh temple here during the winter months. Adi Shankaracharya established a math here which is known as Shankaracharya Math. There are two temples within the Math complex.  Joshimath is also the base for the trek to Hemkund Sahib and the Valley of Flowers.

Hanuman Chatti – There is an ancient Hanuman temple here.It is believed that all wishes of a true devotee will be granted. This is also the place where Lord Hanuman is said to have dented Bheem’s ego.

Pandukeshwar – 23 km from Joshimath, Pandukeshwar is famous for its Yog Dhyan Badri Mandir, believed to be as old as the Badrinath temple. One of the ‘Sapta Badri’, the temple is dedicated to Lord Vishnu in ‘Dhyan Mudra’ or meditative posture.

Narad Kund – Near Tapt Kund. It is believed Sage Narad authored “Narad Bhakti Sutra” here. Adi Shankaracharya discovered the Idol of Lord Vishnu at this place, which was installed in the temple.

Mana Village – This is the location of Vyas Gufa and a Ganesh temple. It is here Vyasji took the help of Lord Ganesh while composing the Mahabharat.

Bheem Pul – This natural rock bridge is near Mana Village, and is believed to have been constructed by Bheem by laying a rock across the river.

Saraswati River – As is known, the Saraswati river vanished thousands of years ago. A small stream flowing from the mountains near Mana village merges with the Alaknanda 1 km ahead and is believed to be the lost Saraswati river.

Vasudhara Falls – This idyllic spot is 6 km from Mana village and can be reached by a trek. Beautiful scenes of the glaciers and peaks can be seen from here.

Dhari Devi temple –  On the banks of the Alaknanda and about 133 km from Joshimath, this temple is dedicated to Dhari Devi. It has great significance and it is believed the Goddess changes her appearance from girl to woman to old lady during the course of a day.

All this and much more ….

Besides the places mentioned above there are many more including –

These have been written about as a separate blog. Click on the link below to read.