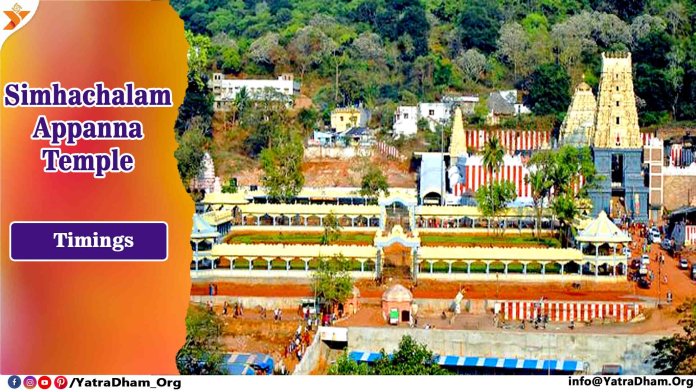 Simhachalm Appanna temple is Dedicated to Lord Vishnu, worshiped there as Varaha Narasimha in Sri Varaha Lakshmi Narasimha temple, is a Hindu temple situated on the Simhachalam Hill Range, which is 300 meters above the sea level in Visakhapatnam, Andhra Pradesh, India. According to the temple’s legend, Vishnu is apparent in this form (lion’s head and human body) after saving his devotee Prahlada from a murder attempt by the latter’s father Hiranyakashipu. Except on Akshaya Tritiya, the idol of Varaha Narasimha is covered with sandalwood paste throughout the year, which makes it resemble a linga.

It is the second-largest temple, after Tirumala in Andhra Pradesh, in terms of income earned. It is believed that Lord Vishnu is capable of giving Progeny to women and fulfilling the wishes of devotees who worship Lord Vishnu from the bottom of their hearts.

Followed by Narasimha Jayanti, Navaratrotsava and Kamadahana. The festivals which are celebrated at this temple have an effect on the Dravida Sampradaya. Apart from well-known poets, the temple is found in many literary references and lyrical works (dedicated by anonymous writers) preserved in the government Oriental Manuscripts Library, Chennai.

From now onwards, timings will be increased to six and half hours which means from 6:30 to 1:30

NOTE: Devotees will not be allowed to enter the temple between 11:30 am to 12:00 pm due to ‘Rajabhogam’ being benign prepared for Lord Narasimha every day.

For special Darshan, temple charges will be INR 100 rs.

There are two ways of approach in the temple, one from the left in a railing support pat ways, flat except in some places two/three steps, and another from the front gate around 40/46 steps with the support of railings. The senior citizen with walking conditions can very well visit the temple.

To Reach Simhachalam Temple’s main Bus stand is Vishakhapatnam frequent buses are operating between Vizag and Simhachalam. There are government and private bus facilities from main cities like Hyderabad and Vijayawada, Tirupati, Rajahmundry, and so on.

It is located in the state of Andhra Pradesh in the district of Visakhapatnam. Book your stays from YatraDham.Org check out the list below to book your rooms