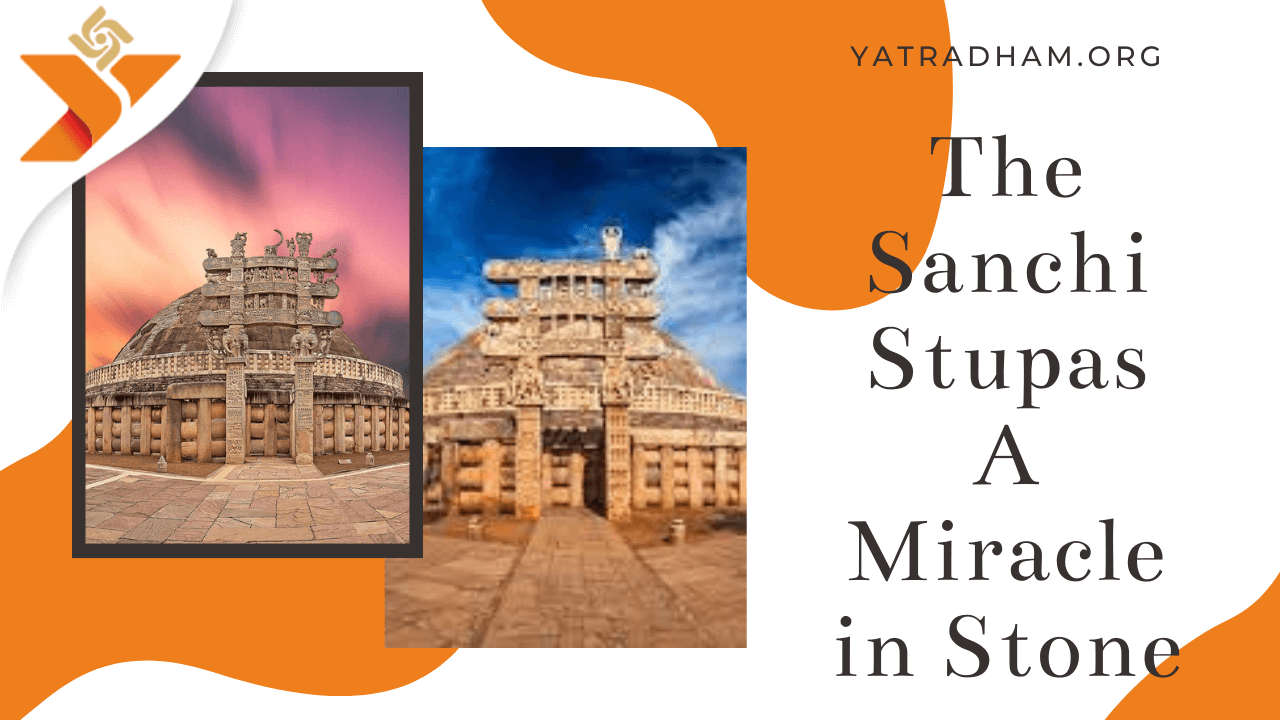 Sanchi, about 45 km from Bhopal in Madhya Pradesh is the site of an ancient Buddhist complex comprising Stupas, Monasteries and Monuments. These structures were built starting from the 3rd century BCE to the 12th century CE. Sanchi has been a UNESCO world heritage site since 1989. The monuments here are remarkably well preserved. The monument building was started by Emperor Ashoka of the Mauryan Dynasty in the 3rd century BCE. It was continued by the Shungas in the following century and the Satatvahanas after that. There was a gap of about 400 years, after which the building was restarted by the Gupta Empire in the 5th century CE. This continued till the 12th century CE. Sanchi was known as Kakanaya, Kakanadabota and Bota-Sri Parvata in ancient times.

The first of the monuments known as ‘The Great Stupa’  was commissioned by Ashoka the Great in the 3rd century BCE. Originally it was a smaller and simpler structure built over the spot where Buddha’s relics had been placed. Two Asoka Pillars were erected outside the Torana (Arched Decorated Gateway) of the Stupa. The pillars are now in a damaged condition and parts of them are in the Sanchi Museum. In later years the Stupa was doubled in size by the Shungas.

Another structure built by Ashoka’s father Bindusara is a free standing temple that was made of stone and wood. It burned down in the 2nd century BCE and only the damaged stone parts remain.

Pushyamitra Shunga was a General in the Mauryan Army. He took over the Empire in the 2nd century BCE. The second king of the Shungas was his son Agnimitra. During this period the original Great Stupa was enlarged and a ‘Dharmachakra’ was placed at the top. Two more Stupas with elaborate decorations were added during this period. Two pillars, 16 feet high were also erected. These are known as the Shunga Pillars.

The Satavahanas conquered most of the Malwa region from the Shungas and thus Sanchi came under their rule. They ruled from the 1st century BCE to the 1st century CE. They built most of the Toranas (Arched decorated Gateways) around the Mauryan and Shunga Stupas. By this time there was marked change in the carving and sculpting techniques used. It is believed by archaeologists that the work was done by expert ivory carvers from Vidisha. The Toranas were beautifully decorated with carvings showing scenes from Buddha’s life, but with the figure of Buddha missing. This is because Buddha was considered above the human body and to show Him in a body would be disrespectful. Also depicted on the Toranas are Jatakas tales, Miracles of Buddha and the temptations of Buddha.

The Western Kshatrapas conquered this area in about 125 CE. They ruled large parts of Western and Central India until the 4th century CE. Much of the history of this time is not well known. However it is known that the Western Kshatrapas added the Southern Gateway and renovated some structures in Sanchi.

By the early 5th century the Guptas were the rulers of a vast empire which included Sanchi. Starting with Chandragupta, various Gupta kings added various temples, gateways, Pillar and Stupas to the complex. Two temples that are similar to rock cut temples were built by them. The ceilings were made of wood and have not survived. Two pillars with a marked different architectural style were erected by the Guptas. THe date of these pillars cannot be accurately ascertained but they estimated to be from the 6th century CE. Building continued till the 7th century CE during the rule of Harshavardhan.

Sanchi was virtually forgotten after the 13th Century until it was rediscovered in 1818 CE by General Taylor, a British Officer. The site was half buried and overgrown with vegetation but it was well preserved. Later in 1912, Sir John Marshal, Director General of Archaeology, ordered the restoration work at the site. In the years between 1820 and 1900 CE Sanchi was left neglected and was the target of looters and treasure hunters. Many artifacts were stolen and are now in museums abroad. Sir John Marshall established the Sanchi museum in 1919 to preserve artifacts and other objects from the complex.

Sanchi is one of the finest examples of the heritage of India. The Great Stupa that was the first to have been built is the oldest stone structure in India. It is a place that words cannot do justice to. Sanchi has to be visited to know its true value and beauty.

Are you planning to visit Sanchi  and looking for options to Stay with Family? Then don’t wait! Choose from our selected Dharamshala in Sanchi and book your vacation with YatraDham.Org

Pipapriya - Places to visit and How to Reach

Places to Visit in Kovalam