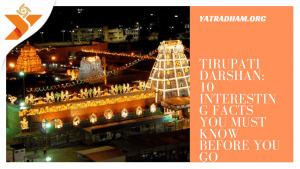 Tirupati is a city in the Indian state of Andhra Pradesh. Its Sri Venkateswara Temple sits atop one of the 7 peaks of Tirumala Hills, attracting scores of Hindu pilgrims. Sri Venkateswara National Park, home to the temple, also contains the Sri Venkateswara Zoological Park with lions and primates. Nearby, next to a waterfall and cave believed to be sacred, Sri Kapileswara Swamy Temple is dedicated to Lord Shiva Explore Tirupati Darshan: 10 Interesting Facts You Must Know Before You Go

Tirupathi laddu has a GI patent, which is only granted to identify a product with specific provenance. The prasad laddu at Tirupati Balaji is arguably the first offering at any place of worship to be recognized as intellectual property, in this case, of the Tirumala Tirupati Devasthanam (TTD), that manages the temple.

Tirumala Tirupati temple is located at the height of 3200 feet, and the surroundings are cool. Irrespective of this fact, the idol of Lord Balaji remains at a temperature of 110 degrees Fahrenheit. Every morning, after the bath ritual, droplets of sweat appear on the idol of Lord Balaji. On Thursdays, when the priests remove the ornaments of the idol for a holy bath, it is said that they come off with a sensation of warmth

The idol of Lord Tirupati Balaji placed may appear to be standing in the center of the sanctum sanctorum, but technically, it is not so. The idol is actually placed in the right-hand corner of the shrine.

Lord Balaji’s image may be carved out of stone, but it is thoroughly infused with life and very much alive if reports are to be believed. The idol of the holy deity maintains a temperature of 110 degrees Fahrenheit, even though the surroundings are cool due to the steep location of the temple (3000 feet). Every morning, after the holy bath known as Abhishekham, droplets of sweat appear on the image of Balaji which have to be wiped off with a silken fabric by the priests. On Thursdays, when the priests remove the ornaments of the idol for a holy bath, they come off with a sensation of warmth.

Garuda is believed to be the vehicle of Lord Venkateswara. Surprisingly, you find a hill in Tirumala that features a natural rock formation in the form of Garuda.

Tirupati Balaji Temple holds a special significance amongst Hindus. According to the religion, Hinduism says that there are a total of 8 Vishnu Swayambhu Kshetras and Tirupati is one of them. Also, this temple is mentioned by the Tamil Azhwar saints to be one amongst 106 Vishnu temples, to be present in the earthly realms

worn by the Lord Tirupati Balaji Temple. However, there is a story behind the flawless locks, we see. Legends say, Lord Balaji lost a few of his hair during an unexpected incident during his reign on the earth.

However, Neela Devi, one of the Gandharva Princesses noticed the same incident and cut a part of her glorious hair. She offered the chopped locks to Lord Balaji and requested him to plant them on his own head.

Lord Balaji was extremely pleased with Neela Devi’s devotion, so, he accepted her kind offer. He also promised to bless all the devotees visiting his shrine and sacrificing their hair at his feet. Since then, shaving off their hair before the deity has become a custom among the Lord Balaji devotees

Despite the priests trying their best, the back of Lord Balaji’s idol at the Venkateshwara Swamy temple stays moist. No one can explain why that is so. Interesting, isn’t it?

Indian Goddess Laxmi still lives in the heart of Balaji. Literally! According to the priests in Tirupati Balaji, during NijaRoopa Darshanam every Thursday, the main idol is decorated with white wood paste. After the paste is taken off, the imprint of the Goddess is left.

Are you planning to visit Delhi and looking for options to Stay with your Family? Then don’t wait! Choose from our selected Dharamshala in Tirupati  and book your vacation with YatraDham.Org